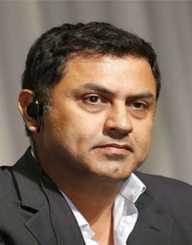 Nikesh Arora was born on February 9, 1968.  He is the former President and Chief Operating Officer of SoftBank Corp. He was also a top executive in Google.

Nikesh Arora was born on February 9, 1968, in Uttar Pradesh, India. He was brought up alongside a sister. He attended The Air Force School located in Delhi. In 1989, he graduated with a Bachelor’s Degree in Electrical Engineering from the Indian Institute of Technology, Varanasi. He later joined the North Eastern University, Boston, Massachusetts where he obtained an MBA.

In 1992, Nikesh Arora became an analyst at Fidelity Investments. He joined Boston College where he joined a Master’s program in finance. He took night classes while he worked during the day. In 1995, he earned his CFA (Chartered Financial Analyst). He later became the Vice President of Fidelity Technologies. He left Fidelity Investment and joined Putnam Investments. He then left Putnam for Deutsche Telekom. In 2000, he established T-Motion PLC which was a company that provides value-added services to the 3G Services of Deutsche Telekom. In 2002, T-Motion PLC merged with Deutsche Telekom.

In 2004, Nikesh Arora accepted a job at Google where he managed Google’s European Operations until 2007. His determinations earned Google billions of money. In 2007, he started handling operations in African and Middle East markets until 2009. In 2009, he became the President of Global Sales Operations and Business Development, a post he held up to 2010. In 2011, he was appointed the Senior Vice President and Chief Business Officer in Google. He was being paid $57.1 million. Thus he was a highly paid executive in Google. In 2014, he joined SoftBank Corp as Vice Chairman of the group. He was also the CEO of SoftBank Internet and Media Inc. Over a period of two years, he received a compensation of $208 million. In 2016, he resigned from his post at SoftBank.

Nikesh Arora married Kiran as his wife. The two had a daughter before they divorced. In 2014, he married Ayesha Thapar who is an entrepreneur. He plays golf during his leisure time, and he is a cricket fan. He is currently forty nine years old. He has an estimated net worth of $482 million. He loves Indian food and spending time with his family.