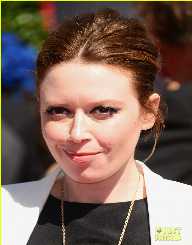 Natasha Lyonne is an actress, producer, and film director. She is an Emmy Award nominee. Some of her most famous projects include Everyone says I Love You, Orange Is the New Black and Slums of Beverly Hills.

Natasha Lyonne was born in New York on 4th April 1979. Her father was an Aaron Braunstein was a boxing promoter and a radio host while her mother Ivette Buchinger was a housewife.

She was raised from an Orthodox Jewish family. The first stage of Lyon's life was spent in New York before her family moved to Israel when she was 8. Her parents later divorced prompting her mother to move back to New York with her two children.

In New York, Natasha Lyonne attended The Rabbi Joseph Upper School, a Jewish school where she was on scholarship. She was however expelled from the school for selling marijuana.

Her mother later moved to Miami where she attended Miami Country Day School. Lyonne however never graduated from high instead of choosing to go to an Art school.

Natasha Lyonne attended Tisch School of the Arts but later left the school due to lack of funds to pay for her school tuition fees. From the age of 16, Lyonne lived independently since she was not close to her mother and her father had been away from her life since she was a kid.

At the age of six, her mother enrolled Natasha Lyonne into Ford Modeling Agency. Her exposure in the agency saw her land into a role in Heartburn film and later Pee-wee's Playhouse.

Lyonne, however, feels that it was too early for her parents to put her into the limelight at the age of six.

Natasha Lyonne made her debut in Everyone Says I Love You at the age of 16. She went on to make 30 consecutive appearances in the film for the next ten years.

Other films Lyonne starred during that time include But I'm a Cheerleader and Slums of Beverly before appearing in several other films.

Her most famous role at an early age was the American Pie series where she featured as Jessica. She later used her proceeds from acting to buy herself an apartment in Gramercy Park.

She also enrolled in New York University to take a short course in philosophy and film. Her acting career now steady and she was earning good money. She went on to appear in more than 15 films.

Natasha Lyonne's theatre appearance includes the award-winning play Two Thousand Years before, later making an appearance in, Loss, and What I Wore.

Since 2014, Natasha Lyonne has been in an open relationship with Fred Armisen, the comedian. The two have, however, not committed their relationship to marriage.

Despite her colorful career, Natasha Lyonne has never been short of controversies. She was arrested in 2000 for driving under the alcohol influence. Five years later she was evicted by her landlord following complaints from her neighbors over indecent behavior. In 2006, a warrant of arrest was issued for her failed court appearance.

Natasha Lyonne was diagnosed with hepatitis C, a heart infection which leads to collapsed lungs. She received her treatment in Manhattan' Beth Israel Medical Center.

Heart surgery was later performed to correct heart infection. She then recovered from the operation in 2012 and immediately made an appearance in The Rosie Show to discuss her past health issues.