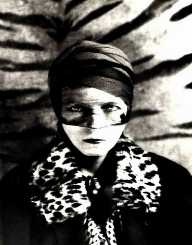 Nancy Cunard was born on March 10, 1896. She was a British writer. She was also an heiress and a political activist. She was renowned for fighting against racism and fascism. She died at the age of Sixty Nine years.

Nancy Cunard was born Nancy Clara Cunard on March 10, 1896. She was born to Sir Bache Cunard and Maud Alice Burke. She was brought up in Nevill Holt, Leicestershire. In 1911, she went to stay with her mother in London after their divorce.

She attended her education in France and Germany. She later contributed to ‘Wheels’ which was an anthology. In 1920, she moved to Paris. She after that was involved in Modernism, Surrealists, and Dada. In 1923, she modeled for Myra Viveash in Antic Hay. In 1928, she modeled in Point Counter Point for Lucy Tantamount.

She was in love in African culture and was wearing African attires. In 1927, she went to La Chapelle-Granville, Normandy in a farmhouse. In 1928, she set up the Hours Press.

Nancy Cunard later fought against matters concerning racial politics and civil rights in the United States of America. In 1931, she wrote and published ‘Black Man and White Ladyship.’ She later edited the Negro Anthology. She was later identified as an Anarchist.

In 1930, she started fighting against fascism. She later wrote all about the Mussolini’s annexation of Ethiopia and the Spanish Civil War. In 1937, she wrote and published war poetry pamphlets. She later worked as a London translator on behalf of the French Resistance during World War II.

In 1916, Nancy Cunard got married to Sydney Fairbairn with whom she divorced in 1925. She later engaged herself in alcoholism. She later suffered from self-destructive behavior and mental illness. She died on March 17, 1965, in H?pital Cochin in Paris. She died at the age of Sixty-nine years old.