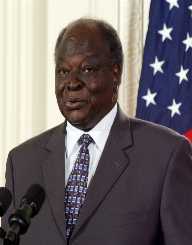 Mwai Kibaki is best known for his role as President of Kenya - its third President. He has played the role amid various criticisms of his government. His work in public office has spanned about fifty years.

Mwai Kibaki was born on November 15, 1931, as Emilio Stanley Mwai Kibaki to his father KibakiGithinji and his mother TeresiaWanjiku. He is a member of the Kikuyu ethic group, the largest ethnic group in Kenya.

Before he was propelled into public eye, he studied and graduated from Makerere University and London School of Economics. He returned from London thereafter to pursue public service.

His life in public service was cumulative of various prestigious positions. He served as Minister for Finance between 1969 and 1981, Minister for Home Affairs from 1982 to 1988, and Minister for Health from 1988 to 1991. He was also the fourth Vice President of Kenya under Daniel arapMoi, the then President, from October 1978 to 24 March 1988. He later became the third President of Kenya since its independence in 1963, preceded by Daniel arapMoi. He was afterward succeeded by Uhuru Kenyatta, son of Jomo Kenyatta, Kenya's first president.

In 2002, Kibaki and his party, NARC (National Rainbow Coalition), won the Presidential elections, with a clear victory over the opposition. This began his rulership of Kenya which spanned about 11 years. During his tenure, he had a number of successes which included the free primary education initiative which provided for over 1 million underprivileged children. Also during his tenure, there was also significant growth in the economy compared to his predecessor's.

Kibaki's government was no smooth sailing one, but he has both been hailed as a wise leader, with a lot to show for his time as President, as well criticized for his major failings. He handed over the presidency to his successor, Uhuru Kenyatta, on the 9th of April, 2013. During his speech at the inauguration ceremony, he stated how happy he was to pass on the torch to a new generation of leaders.

Kibaki belonged to the largest ethnic group in Kenya and was criticised for what was termed a lack of discernment on his path in encouraging the domination of this singular ethnic group, Kikuyu, above others.

He was also criticised for entering the presidential race in the 1992 multi-party electionsdespite his publicly announced doubts as to the fruitlessness of attempts to overthrow KANU (Kenyan African National Union) from power to introduce multi-party democracy. This brought him many criticisms as he was seen as an opportunist. He had first publicly underminedattempts at creating the system and then he leveraged on its success. He lost the i992 elections to Moi. He also lost the subsequent Presidential elections, though he was first runner up.

Furthermore, amid tension and suspicions about the 2007 elections, Kibaki received painful criticism due to what was perceived unfair by factions of voters. The period between 2007 and 2008 was characterized with widespread outrage, violence, tension and destruction of property. However, following a mediation by the former United Nations Secretary General, Kofi Annan in conjunction with other bodies, a deal called the national accord was struck between Kibaki and the opposition, RaliaOdinga, bringing an end to the strife and instability of government.

He married Lucy Kibaki in 1961. They had four children together, Judy Wanjiku, Jimmy Kibaki, David Kagai, and Tony Githinji. They remained together until his wife’s death in 2016.