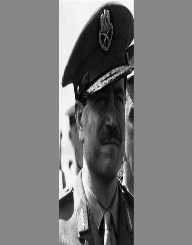 Mustafa Tlass is a senior Syrian military officer and was the country’s Minister of Defense from 1972 to 2004. He helped establish the Assad clan's rule in Syria in 1970.

Mustafa Abdul Qadir Tlass was born on May 11, 1932. His father, Abdul Qadir Tlass, was a Sunni Muslim and sold ammunition to the Turks during the Ottoman period. The family lived in Rastan, near the city of Homs.Mustafa graduated high school in his local village.

In 1947 he joined the Ba’ ath Party, he was drawn towards its doctrine. At the age of fifteen, he preached its secular and pan-

Arabist dogma. In 1952, he attended the Homs Military Academy, where he was assigned to air force division.

Mustafa Tlass met Hafez al- Assad when he was stationed in Cairo with several other Syrian Baath officers; they were placed there to avoid the conflict in Damascus. During 1958 until 1961, where the United Arab Republic merger between Syria and Egypt was occurring.

Those who decided that the United Arab Republic merger was unfairly towards the favor of Egypt sought to break up the union. On September 28, 1961, there was a coup and declaration Syria’s separation from the merger.

The coup saw Hafez al- Assad and several others sent to prison by Nasser, so Mustafa Tlass fled the country with both their family.

In 1963’s coup d’etat, Hafez al- Assad managed to rise in power, backed by the Ba’ath party. Mustafa Tlass was promoted to Lieutenant Colonel. Two years later in 1965, he issued an arrest against his pro-government comrades.

As Hafez gained more power in the coup by Alawite- dominated Ba’ath faction, in 1966, Mustafa Tlass too became more powerful after Hafez managed to overthrow the National Command using the Military Committee.

After the Six Day War, after the defeat of Syrian government, al- Assad was appointed Minister of Defense. He installed Mustafa Tlass as new Chief-of-Staff to strengthen their committee.

In 1969, Mustafa Tlass head to Beijing to secure weapons from the Chinese government, but in the end, the Soviets agreed to sell them to Syria instead.

Using the 1970’s Corrective Revolution as the guise, Hafez al-Assad became seized power and proclaimed himself a Dictator in Syria.Mustafa Tlass was promoted to Minister of Defense in 1972, due to his loyalty to his friend.

Mustafa Tlass was in charge of suppressing dissent from all sides.

After the death of his friend Hafez in 2000, Mustafa served on a committee to transition the power to Bashar al- Assad, who was the son of Hafez and next leader of Syria. Mustafa Tlass became a Defense Minister as well as a Deputy Prime Minister.

He is still a member of the Ba’ ath Party's central committee. Mustafa is still the leading party’s military bureau and chairman of the military committee.

Hasan Turkmani took Mustafa Tlass s position as Minister of Defense in Syria in 2004, and he quit regional command in 2005. In 2011, he left Syria for France, stating that it was for medical reasons.

In the same year, there was a revolution against Bashar al- Assad.

Mustafa Tlass strived to be seen as a man of culture. He wrote and published The Matzah of Zion in 1983, featuring controversies. Matzah of Zion was translated into English in 1991. He opened a publishing house:

Tlass books, publishing anti-semitic writings and controversies. Mustafa Tlass was the first person who tries to find out pre-Ba'ath Syria objectively. Plus, he wrote poems and history.

On his retirement in 2005, Mustafa Tlass published his two-volume memoirs, entitled ‘Mirat Hayati,’ translated as Reflections of my life.

In 1958, Mustafa Tlass married Lamia Al Jabiri, who is a member of the Aleppine aristocracy. The union helped him advance socially and gain acceptance into the traditional elite society.

They have four children: Nahid, Firas, Manaf, and Sarya, none are living in Syria.