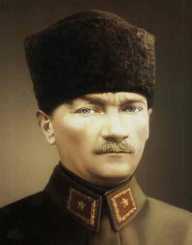 Mustafa Kemal Ataturk, son of Ali Riza, was born 19th May 1881 to Ali Riza Efendi and ZubeydeHanim. He was born in Salonica, Salonica Vilayet, in the Ottoman Empire. The area is now part of Greece.

Ataturk's father was a militia officer, but he also worked as a clerk in the Title Deed Office. He earned a good living for his family. They were a middle-class, Muslim family.

Although his mother wanted him to attend a religious school, his father guided him to a private school that offered a more academic background.

Mustafa Kemal Ataturk was politically active when he graduated. Due to this, he was arrested for activities that were considered anti-monarchist. After several months in prison, he served with the Fifth Army.

He was based in Damascus and given the position of Staff Captain. Before long, Ataturk joined Motherland and Liberty, a secret group of reformist officers.

In 1907 he received a promotion to Senior Captain, and he then served with the Third Army. He then joined the Committee of Union and Progress.

In 1908, Mustafa Kemal Ataturk was part of the Young Turk Revolution that overthrew Sultan Abdulhamid II. As a result, the constitutional monarchy returned to the throne.

Although he resigned from the army, Mustafa Kemal Ataturk returned in August 1918. The new Sultan requested him to take command of the Seventh Army in Palestine. The war finished at the end of October. Ataturk oversaw the return of the troops to their home, and he then moved into a government position.

Ataturk worked for the Ministry of War until mid-1919.

Due to Constantinople and Izmir both being occupied, the Turkish National Movement began. The Turkish War of Independence soon followed.

Mustafa Kemal Ataturk controlled the army, and after a short time, he resigned again. He moved into politics, and his party received the majority for running parliament. The British military dissolved parliament, and another election was held. It was known as the Grand National Assembly (GNA).

Ataturk was the speaker when the GNA opened, creating co-rule with the British.

He talked the GNA into raising a National Army. He then took that army into battle for the independence of his country. Over the next two years, he fought two major battles against the Armenians and the Greeks, and he won both.

The Republic of Turkey began on 29th October 1923.

Mustafa Kemal Ataturk and his men began reform across all levels, including economic, social, and political. He turned Turkey into a modern, democratic country. This included abolishing the caliphate and transferring its authority to the GNA.

They overhauled the education system and assisted with the transition into modern dress rather than the old Middle Eastern religious attire.

One of the Sheikhs opposed the caliphate being made redundant. He led the conservatives that attacked it as anti-Islam and tried to stir up trouble.

Mustafa Kemal Ataturk forged ahead over the next few years, continuing with his reforms. He separated Islamic law from secular law and Turkey introduced their penal code in 1926.

He empowered women by giving them freedom. This included education for females and women were on a par with men in areas like divorce and inheritance.

In 1928, he introduced a Turkish alphabet. They moved away from the Arabic that had previously been used.

In 1931, Mustafa Kemal Ataturk established several associations to help build a solid foundation for Turkey. They were the Turkish Historical Society, the Turkish Language Association, and the Turkish Education Association.

He made treaties and peace agreements with neighboring nations to further stabilize Turkey's existence.

Turkey suffered during the Great Depression, as did the rest of the world. In 1931, Ataturk established the Central Bank of the Republic of Turkey. This was to phase out the Ottoman Bank and control the exchange rate.

Over the next six years, Ataturk oversaw the development of industrialization and a move towards affiliation with the west.

Mustafa Kemal Ataturk had many awards and honors. These included:

1915: Awarded the Iron Cross of the German Empire
1916: Awarded Second Class Knight Order of the Medjidie
1923: Awarded the Medal of Independence

In 1923 Mustafa Kemal Ataturk married a shipping magnate's daughter, but the couple divorced in 1925.

Ataturk associated with several women during his lifetime. He also adopted 13 children – 12 girls and one son.