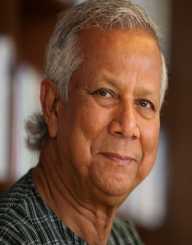 Muhammad Yunus was born 28th June 1940 in Chittagong, Bengal Presidency, in British India. His father was a jeweler, and Yunus was one of nine children. His family moved to Chittagong when he was four, and he attended Lamabazar Primary School. Before relocating, the family lived in a small village.

After graduation from high school, he later enrolled at Dhaka University, where he studied Economics. Yunus earned his Bachelor of Arts degree in 1960, and he followed this with a master's degree in 1961.


Study in the US

Yunus became a research assistant for the Bureau of Economics. He then joined Chittagong College as a lecturer in economics.

In 1965, Yunus received a Fulbright scholarship. The scholarship allowed him to study in the US. In 1971, he graduated from Vanderbilt University with his Ph.D. in economics. During this period, from 1969 to 1971, he was also an Assistant Professor of Economics. He worked for the Middle Tennessee State University.

In 1971, the Bangladesh Liberation War took place. Yunus ran an information center from the US, but he returned to Bangladesh when the war finished.

The government appointed him to the Planning Commission, but he resigned shortly after. He joined Chittagong University as the Head of the Economics Department.

After the famine of 1974, Yunus put his efforts into reducing poverty. He developed an economic program in 1975, and he also established the village government program.

In 2005, the High Court ruled that village government were illegal and not constitutional.

In 1976, Yunus became interested in helping the poor to get finance. The finance was to help them start businesses. He managed to get a loan from a government bank and started from there. Yunus continued over the next few years to raise loans and help the poor, and microcredit was born. Yunus pioneered microcredit and microfinance.

He received a lot of opposition in the Muslim community who tried to stop his efforts, but they had no effect. By 2007, there were 7.4 million borrowers, and loan distributions of just over US$6 billion.

In 2011, the government announced it would be reviewing the activities of Grameen Bank. There was a substantial amount of support for Yunus. Even so, the High Court upheld his dismissal as Managing Director of Grameen.

Government allegations against Yunus and his microcredit were tried by media to try and get rid of him.

Cleared of misappropriating funds in December 2010, the Bangladeshi government still started its investigation in 2011.

People believe that Sheikh Hasina was politically motivated to make the attacks on Yunus.

Yunus had other legal cases brought against him. These included a food-adulteration case and further accusations concerning the Grameen Bank.

Sheikh Hasina brought several trials against Yunus while she was Prime Minister of Bangladesh.

The trials puzzled millions of people all over the world. The first trial, in 2010, removed Yunus from his position at Grameen Bank.

The government also accused Yunus of earning money without permission as a result of winning the Nobel Peace Prize. Yunus also made money from selling his book.

History of Yunus And Hasina

Yunus advocated strongly for Sheikh Mujib, who was Hasina's father. Yunus worked with Mujib to rebuild Bangladesh after the war in 1971.

Hasina was a close ally at the time, but this changed sometime after her father's death.

Yunus thought about running against her politically, but he never did. He also won the Nobel Peace Prize, which Hasina was expecting to win herself. As a result, she quickly turned from friend to foe.

Yunus has received many awards and honors. These include:

In 1970, Yunus married Vera Forostenko. The couple had a daughter together but divorced in 1979.

Yunus's second marriage was to Afrozi Yunus, and they also had a daughter.

Yunus is Chair of The Yunus Centre, based in Dhaka, Bangladesh. It is a think-tank that works in the areas of sustainability and alleviating poverty.