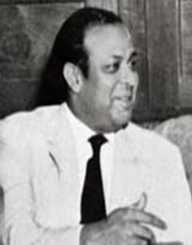 Muhammad Ali Bogra began his education in Calcutta at Hastings House. Next, he went to Calcutta Madrassah. Finally, he attended the Presidency College at Calcutta University.

Muhammad Ali Bogra married Begum Hamida Muhammad Ali and had two sons with her. Then he married his 2nd wife Aliva Saddy on April 2, 1955. When he married Aliva, he commented that “Polygamy was Muslim’s answer to divorce.” It was after that 2nd marriage that woman activists in the country protested against him and his marriage.

At a young age, Muhammad Ali Bogra was an active member of the waqf board because he had a high interest in politics. He was elected to the legislature of undivided Bengal in Calcutta by the Muslim League Assembly in 1937. This was the beginning of his political career.

He went on a diplomatic mission in Burma during May of 1948. Mohammed Ali Jinnah assigned it to him. Muhammed Ali Jannah was the governor-general at the time.

Muhammad Ali Bogra went on a diplomatic mission in Burma during May of 1948 when Mohammed Ali Jinnah assigned it to him. During this same time, Muhammed Ali Jinnah suffered a heart attack, and Nazimuddin took his place the following year in 1949 as a new governor-general. Nazimuddin then sent Muhammad to Canada as the first high commissioner of Pakistan. He was then made the ambassador of the US in 1952 during some political and social turmoil in Pakistan.

Although Muhammad Ali Bogra protested, they made him Prime Minister of Pakistan in April of 1953. Ghulam Mohammed appointed him. Ghulam was the governor-general at the time. He also became president of the league party by a unanimous vote. There were thousands of tons of wheat ordered by the US President Eisenhower and shipped to Pakistan. This was to help the country while it was still new.

The Bogra Formula was outlined in 1953. It was to form a bicameral legislature. This meant that Parliament would have an upper house ten seat from each province, which would have 50 total seats.