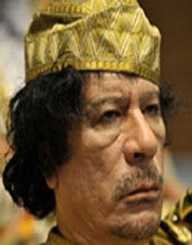 Muammar Gaddafi was born in between 1940 and 1943. He was a Libyan revolutionary. He was also a politician and a political theorist. Muammar died at the age of between Sixty Eight and Seventy One years.

Muammar Gaddafi was born Muammar Mohammed Abu Minyar Gaddafi in between 1940 and 1943 in Qasr Abu Hadi, Italian Libya. He was born to Aisha and Mohammad Abdul Salam bin Hamed bin Mohammad (Abu Meniar). He grew up alongside three siblings. Muammar earlier studied Islamic. He later attended elementary school in Sirte. Muammar alongside his family then went to Sabha, Fezzan. He later took his secondary school studies.

Muammar later got interested in politics having Gamal Abdel Nasser as his role model. In 1961, he was later involved in demonstrations in criticism of the monarchy. He later led a protest that was against Syria’s Secession from the United Arab Republic. He alongside his family moved to Misrata after they were evicted from Sabha due to Gaddafi’s character. Muammar later joined Misrata Secondary School. He then entered the University of Libya, Benghazi. He later dropped out in need of joining the military.

In 1963, Muammar Gaddafi joined Royal Military Academy for military training. One year later, he alongside a group of loyal cadres formed the Central Committee of the Free Officers Movement. In 1966, he went to the United Kingdom for nine months to study. He studied English course at the Beaconsfield, Buckinghamshire. He then studied Army Air Corps signal instructors course at the Bovington Camp, Dorset. Muammar lastly studied Infantry Signal Instructors course in Hythe, Kent.

His other ally Jalloud was in charge of seizing the city’s anti-craft batteries. His other associate Khweldi Hameidi’s task was to go and arrest and force the Crown Prince Sayyid Hasanar-Rida al-Mahdi as-Sanussi to withdraw his claim to the throne. Gaddafi later announced the formation of the Libyan Arab Republic soon after the coup was successful.

Muammar later appointed Jalloud as the Prime minister and Sulaiman Maghribi as the head of the Civilian Council of Ministers which had a purpose of implementing the Revolutionary Command Council policy. They later proceeded with the consolidation of the revolutionary government. They also continued with the modernization of the country. In 1970, he brought up they banned three trade unions. In 1971, he allowed and sponsored the Libyan General Women’s Federation.

Muammar Gaddafi outlawed strikes by workers in 1972. He also suspended newspapers. He later supported other militant groups around the universe. In 1973, he started a famous Revolution. He then formed the Islamic call Society which he used to convert Gabonese President Omar Bongo and president of the Central African Republic Jean-BedelBokassa.

In 1975, he published ‘The Green Book’ in three volumes which were all about democracy, socialism and family and tribe. It is in this year that he also declared a state monopoly on foreign trade. In 1976, he established the Revolutionary Student Council which contained students from the Universities. In 1977, the Revolutionary Command Council was abolished due to the attack from its members Omar Mehishi and Bashir Saghir al-Hawaadi who were organizing a coup against Gaddafi but later fled to exile after a massive failure of their plan.

In 1977, Muammar Gaddafi founded General People’s Congress which replaced the Libyan Arab Republic. He later became the General Secretary of the General People’s Congress. In 1978, he quit being the Secretary-General. In 1979, he became the Leader of the Revolution. He later announced the separation of the government and revolution. In 1987, he formed the Revolution within a Revolution. The following year, he created popular militia which in turn replaced the police as well as the army.

In 1997, he got involved in Pan Africanism. In 2002, he became one of the founders of the African Union. Three years later, he led Libya in joining the Common Market for Eastern and Southern Africa. In 2011, protests broke out against his government. He was later arrested by the Misrata Militia and killed.

In 1969, Muammar Gaddafi married Fatiha al-Nuri with whom he had one child. They divorced in 1970. In 1970, he married Safia el-Brasai with whom he had seven children. He died on October 20, 2011, from a shot in the head in Sirte, Libya. He died at the age of between Sixty-eight and Seventy One.