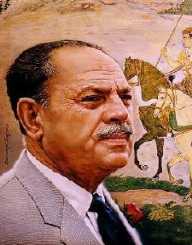 Mohammad Ayub Khan was a benevolent dictator of his time. He was born on 14th of May 1907 in Rehana, Hazara, India. The splitting of British India led to his choice to stay in Pakistan and rise in the Pakistani Army. Pakistan under president Mirza ambiguously chose him for the position of the Commander-in-Chief of the Armed Forces.

Khan deposed the president for trying to subjugate the Constitution and declaring martial law. His tenure as the president saw economic growth and legal reforms for the country. Khan died on 19th of April 1974 in Islamabad, Pakistan

The 14th of May 1907 saw the birth of Mohammad Ayub Khan in Rehana, in a small village in the Haripur District. He was from the Tareen tribe of the Pashtuns that were staying in the Hazara region at the time.

Mohammad Ayub Khan had to use a donkey for transport every day to get to Sarai Saleh during his primary education. He found himself attending a school four miles away from home. Therefore, his parents sent him to live with his grandmother to attend a nearby school in Haripur. Also, Khan was fluent in two local dialects inclusive of his mother tongue and English.

Khan found an opportunity to attend the Aligarh Muslim University after clearing his primary education. During this period, he came across General Andrew Skeen who recommended him for the Royal Military Academy at Sandhurst. He left his education status and went to England to train as a cadet.

Mohammad Ayub Khan was a disciplined cadet and hard working too. This resulted in the reward of many awards alongside sponsorship that saw him through his training. The British India Army on 2nd of February 1928 gave him a commission as 2nd Lt. upon the completion of his training with the 1/14th Punjab Regiment.

Upon joining the Army, as Mohammad Ayub Khan was a good officer he rose through the ranks faster than most people. His promotion to full Lieutenant came on the 2nd of May 1930, and he rose to the rank of captain only seven years later. He got the temporary promotion to Lieutenant-Colonel in 1942. This came with a posting to the Burma war front in The Great War.

After the completion of the 1st phase of the war in Burma, he got a promotion to a Major. This did not last long as 2nd phase of assault in Burma saw to his temporary rank of Colonel. This gave him the command of his regiment. He was later decommissioned for showing cowardice while under fire.

The Fall and Rise

However, the year 1946 came with good tidings, and Mohammad Ayub Khan got commissioned back into the military. Khan got the promotion to the rank of a one-star Brigadier just after one year of service back into the army. Around the same time, the British decided to split the colony British India into two: Pakistan to the North and India to the South. He chose to remain in the Pakistani North of the Colony.

In 1948 still, with the same rank, he was offered the command of the 14th infantry division. The prime minister in 1949 named Khan the army commander of the Eastern side for non-combative service. The next rank as adjutant-general required him to work from the headquarters of the Pakistani Army.

Some years later the Pakistani people demanded the Nationalization of their military pushing the then English commander in chief out of the door. This power twist left a vacuum of who was to fill the rank. The four who were at the time waiting to fill the seat got swindled when Mohammad Ayub Khan was named to the post on 17th January 1951. The arguments at the time were that he was the only one who was not ambitious enough for the seat.

Mohammad Ayub Khan decided to become the President of Pakistan by deposing his ally President Mirza in 1958. This was only three months to his retirement. Mirza had decided that he wanted to subjugate the constitution and declared martial law in the whole country. He then proceeded to name Khan the chief martial law administrator: a pronouncement that he would soon regret deeply.

Khan’s presidency was welcomed by many people in the Pakistani nation, and he put the country under martial law till 1960. The same year Khan organized a referendum seeking the confidence of the public in his rule. Many voters turned up for the formation and formalization of the presidential system of governance with Khan as the president.

The term of Mohammad Ayub Khan as president saw the formation of new reforms in both the constitution and the economic sector. He asked the Supreme Court to make appropriate legal reforms on the constitution. He was however not satisfied with their suggestions and brought in a new constitution altogether. The new constitution played the role of lifting the martial law that had been in action since the year 1958.

In the year 1964, Khan called for a presidential election for the next term. He won the election under a cloud of doubt over Fatima Jinnah. This brought tension in the country leading to riots and chaos. His image did not stand well also as his son got mentioned in the sanctioned political assassinations. This led to more tensions and riots leaving him with no choice but to quit in 1969.

After his retirement, Mohammad Ayub Khan lived his life in private amongst his properties. 19th of April 1974 brought the somber news of his death at his villa in Islamabad. He died at the age of 67 years.