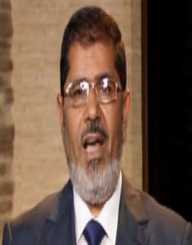 From The Power of Presidency to the Ignominy of Imprisonment: Mohamed Morsi

Mohamed Morsi, a highly qualified engineer, and an Egyptian politician was the first democratically elected President of Egypt. Born to a farmer father and a housewife mother on August 20, 1951, in the Sharqia Governorate, located on the Nile river delta in Northern Egypt, in the village of El Adwah, north of Cairo, Mohamed Morsi went on to become the fifth President of Egypt. He was the eldest of the five brothers.

Mohamed Morsi moved to Cairo in the late 1960s. He studied at the Cairo University and obtained a Bachelor’s degree in Engineering in 1975. He then proceeded to perform his military service in the Egyptian Army from 1975 to 1976. He was posted in the chemical warfare unit of the Army. After accomplishing his obligatory military service, he came back to Cairo University and resumed his studies. He earned a Master’s degree in Metallurgical Engineering in 1978 from Cairo University. Subsequently, he secured a government scholarship enabling him to move to the United States for further study. In 1982, he completed his doctorate from the University of Southern California receiving his Ph.D. in Materials Science with his dissertation ‘High-Temperature Electrical Conductivity and Defect Structure of Donor-Doped Al2O3’.

In 1977, Mohamed Morsi joined the Muslim Brotherhood, a political, religion-based organization, which played a significant role in the Nationalist movement of Egypt. He served the California State University, Northridge as an Assistant Professor from 1982 to 1985. He also worked with NASA in the early 1980s, helping the organization to develop space shuttle engines. He was an expert in precision metal surfaces. In 1985, he resigned from his post at the CSUN and returned to Egypt. In Egypt, he was appointed as a Professor and Head of the engineering department at the Zagazig University, in the city of Zagazig, the capital of Al Sharqia Governorate. He held the post until 2010.

During the authoritarian regime of Hosni Mubarak, Mohamed Morsi was arrested several times for various protests. He was put under arrest in 2006 and was sent to jail for seven months. On January 28, 2011, he was arrested along with 24 other Muslim Brotherhood leaders. However, he was able to escape from the prison in controversial circumstances which are widely publicized as the Wadi el-Natroun Prison break. Later, Morsi was booked and prosecuted for his role in the infamous prison break. On May 16, 2015, he along with 105 others were sentenced to death for the crime. However, the court of cassation revoked the death sentence, and a retrial was ordered.

Mohamed Morsi was sworn in as the fifth President of Egypt on June 30, 2012, thus becoming the first democratically elected President of the country and the first Islamist to lead an Arab Country. After positioning himself firmly in the saddle, he started cracking the whip to assimilate more and more power for him. He sacked some of the prominent army officers in August 2012 and annulled the constitutional amendments passed by the Supreme Council of the Armed Forces (SCAF) restricting the President's powers.

Mohamed Morsi continued to function in an overbearing and dictatorial fashion and refused to attach any importance to the Army’s ultimatum to either share power or resign. Millions of people, who were already outraged with his move to clinch all powers for himself, started protesting and rallied across Egypt calling for his immediate resignation. His Presidential Palace was circled by a vast number of protesters calling for his ouster in June 2013 and on July 3, 2013; he was dislodged as President by the Egyptian Army. After that, the Egyptian Army kept him under house arrest.

Egyptian Military suspended the new constitution of the country and ordered a fresh election. During his Presidential tenure, Mohamed Morsi had visited Ethiopia and attended the African Union Summit in Addis Ababa from 15 to 16 July 2012. His visit to Ethiopia was the first visit by an Egyptian President in 17 years after the attempted assassination of Hosni Mubarak in June 1995. He also attended the 16th Summit of the Non-Aligned Movement in Tehran in August 2012. The visit was seen as an effort to normalize relations with the Non-Aligned countries which was strained due to the peace treaty signed between Egypt and Israel in 1979.

Mohamed Morsi was awarded an honorary Doctorate of Philosophy (Ph.D.) by National University of Sciences and Technology (NUST) in Islamabad, Pakistan on March 18, 2013, on his first state visit to Pakistan. The award was given in recognition of his achievements and significant contributions towards the promotion of peace and harmony in the world and strengthening of relations with the Muslim countries, especially Pakistan.

Mohamed Morsi married his cousin Naglaa Ali Mahmoud in 1979. The couple was blessed with five children. Two of his five children were born in California during his stay in the USA pursuing his academic career. They are American citizens by birth. All of his five children are continuing their respective distinguished professional career in different fields. However, Mohamed Morsi is presently imprisoned waiting for the verdict of his retrial.