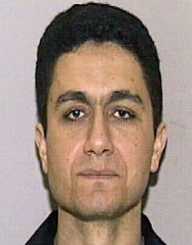 Mohamed Atta was one of the terrorist leaders during the September 11th attacks.

Mohamed el-Amir Awad el-Sayed Atta was born in a small town in Egypt on September 1, 1968. His family was wealthy. His father, Mohamed, was a lawyer. His mother, Bouthayna, was a homemaker, but also a well-educated woman. He had two older sisters. One became a doctor, and the other one became a professor.

Mohamed Atta and his family moved to Cairo when he was ten years old. He spent most of his time studying. His father was a strict man, and the family was private and reclusive. In 1990, he got a degree in architecture from the University of Cairo.

In 1992, Atta moved to Germany. He continued his studies at the Hamburg University of Technology. He first lived with a German couple that ran a program for exchange students. A few months later, they asked him to leave because of his unfriendly personality. He then moved into university housing.

Mohamed Atta was very shy. He regularly went to the mosque, and he kept a strict Islamic diet. He was against the U. S. policy in the Middle East. He also criticized the Egyptian government for going against the members of the Muslim Brotherhood. During his studies, he was a staunch opponent of large apartment blocks. He believed they were a symbol of the West. He criticized Muslim cities that built such structures.

Atta went on trips to Syria and Egypt to examine the architecture there. He also went on several pilgrimages to Mecca. He often disappeared for months at a time. He lied about where he was and said he had lost his passport. He returned to Hamburg, where he worked different jobs. He was part of an urban planning company, as well as a shipping warehouse.

In 1998, Mohamed Atta left the university housing. He moved around different apartments in Hamburg. He associated with many other future terrorists. He was now a part of al-Qaeda. He often went to Afghanistan and Pakistan.

In 2000, Atta applied to dozens of flight training schools in the United States. He moved there with a few of his associates. He got a visa easily because he was a great student who had lived in Germany for a few years. He moved around different apartments. He attended the training school. He flew planes all across the U. S. He frequently met and made plans with al-Qaeda members.

On September 11, 2001, Mohamed Atta arrived at the Portland International Jetport in Maine. He boarded a flight to Logan International Airport in Boston. Once there, he boarded the American Airlines Flight 11. The hijacking began 15 minutes after take-off. While the other hijackers held the passengers and the crew hostage, Atta flew the plane. He crashed it into one of the Twin Towers in New York City.