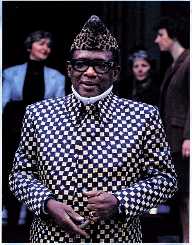 Mobutu Sese Seko was born on October 14, 1930. He was the President of the Republic of Congo. He was also a military dictator and Chairman of the Organization of African Unity. He was also known as Mobutu Sese Seko Kuku Ngbendu Wa Za Banga. He died at the age of Sixty six years.

Mobutu Sese Seko was born Joseph-Desire Mobutu on October 14, 1930, in Lisala, Belgian Congo. He was born to Alberic Gbemani and Marie Madeleine. In 1938, he was brought up b his uncle after the death of his father. He was brought up alongside three siblings. He was taught to read and write French by his mother. He first studied in Leopoldville. He later joined and studied in Christian Brothers School in Coquilhatville. In 1949, after going to Leopoldville, he was caught with a girl. He then served seven years in Force Publique Colonial army as a punishment.

In 1956, Mobutu Sese Seko started by being a full time journalist after quitting the army. He began by writing for the L’Avenir which was a Leopoldville daily newspaper. N 1958, he went to Belgium for journalism studies. He also covered the ‘1958 World Exposition’. He later joined Mouvement National Congolais which was a political party. He later served as Patrice Lumumba’s Aide. He later became an Informer of the Belgian Intelligence.

He later conducted a coup D’état for the neutralization of Kasa-Vulu and Lumumba. In 1961, he was appointed a Major General. In 1965, he led his army in conquering the territory grabbed by the Partisans. Following the general election where Prime Minister Moise Tshombe emerged victorious, Mobutu seized power through a bloodless coup d’état. He later stated that no political events would take part in the country.

In 1967, Mobutu Sese Seko formed the party Popular Movement of the Revolution which was the only popular party in the country. He declared that every citizen would be a member of that party. This later gave him more power to govern the country with. He then ordered the conversion of all trade unions to one National Union of Zairian Workers which was later ruled by the government. He as well declared that all Independent trade parties being illegal.

In the next general election, he won with a higher margin because his party was the only party allowed to vie. He later started a campaign in returning African Awareness. In 1966, he started renaming Congo’s Cities, some he named included ‘Leopoldville to Kinshasa,’ ‘Elisabethville to Lubumbashi,’ ‘Stanleyville to Kisangani’ and also renamed the country to ‘Republic of Zaire.’ He also gave an order for people to pick African names and get rid of the European names. He as well got rid of the European Attire.

He renamed himself to Mobutu Sese Seko Kuku Ngbendu Wa Za Banga which meant ‘The all-powerful warrior who, because of his endurance and inflexible will to win, goes from conquest to conquest, leaving the fire in his wake.’ He later changed his attire to a comparison of an Abacost, walking stick, leopard-skin toque, and thick framed glasses. He then operated by strengthening his power by executing those who were against him. He later reformulated and started buying off his political rivals.

In 1972, Mobutu Sese Seko attempted to rename himself to the President for life but turned out unsuccessful. In 1977, he was re-elected as the president. In 1983, he self-proclaimed himself as a Marshal. In 1984, he again was re-elected. He later appointed his son to succeed him as the President. He then neutralized the Cold war threats. In 1990, he ended the ban on other political parties and allowed an opposition party.

In 1996, he was overthrown by Laurent Desire Kabila who gained support from Yoweri Museveni, Ugandan President, Paul Kagame, Rwandan Minister of Defense and the Burundi Government. He later went to Exile in Togo and lived in Morocco. Later, Laurent- Desire Kabila became the Congo President until his assassination in 2001. In 2001, Joseph Kabila became the president.