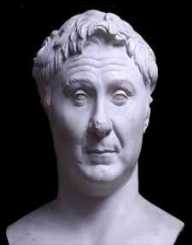 Hailing from a Greek and Persian ancestry, Mithridates VI went on to become the greatest ruler of the Kingdom of Pontus. He was born in 134 B.C. in the city of Sinop. Sinop is situated in modern day Turkey. His father Mithridates V of Pontus was the son of erstwhile Pontic Emperor Pharnaces I of Pontus and mother Laodice VI was a princess of the Seleucid monarchy. Around 120 B.C. Mithridates V organized a sumptuous ceremonial dinner. At that time, some unidentified persons poisoned him to death. His death left the kingdom of Pontus under the combined rule of Mithridates, his younger brother and their mother Laodice VI.

At the time of the death of their father, both Mithridates VI and his brother were minors. Hence, their mother became the sole authority of all the power of the kingdom. While both brothers gradually grew up after the sudden demise of their father, their mother began favouring her younger son, Mithridates Chrestus. Realizing the malicious intention of her mother, Mithridates VI went underground to get away from her evil trap.

ACCESSION TO THE THRONE

Mithridates VI came out of his hiding once he became an adult. By then he had attained significant wisdom and had also gained substantial physical strength. Upon his arrival, the people of the kingdom of Pontus greeted him as a King. He immediately dethroned both his mother and his younger brother and put them in jail. His mother died in prison due to old age. His brother was perhaps tried for treason and was killed. Mithridates accorded royal funeral to both his mother and brother.

After having taken over as the sole authority to rule Pontus, Mithridates VI began sending expeditions to expand his kingdom. He started his conquest adding Colchis into his country. Before his expedition, Colchis was a sovereign kingdom. It was situated on the eastern shore of the Black Sea. His next target was the Crimean Peninsula. He first subjugated the Bosporan Kingdom and the Tauric Chersonesus Kingdom, the two most strategically significant centers of Crimea. Both kingdoms readily surrendered their sovereignty in exchange for the promise of protection against the Scythians.

Under the rule of King Palacus, Scythians were a dominant force in the Crimean Peninsula region at that time. They were the ancient and archenemies of the Greeks of Tauric Chersonese and the Cimmerian Bosporus. Mithridates’ army under general Diophantus fought gallantly and after some various unsuccessful attempts finally conquered the Scythian and its ally Rhoxolanoi.

Consequent upon his conquest of the Crimean Peninsula, Mithridates VI found his own house in turmoil. Paphlagonia revolted and claimed freedom from the rule of Mithridates. In 116 B.C. the kingdom of Phrygia aligned with the Roman province of Asia. He allied with Nicomedes III of Bithynia to keep his expanded kingdom intact. However, very soon he found Nicomedes working against his interest and forming an alliance favouring the Roman empire. The conflict between the two came out openly while retaining control over Cappadocia. Romans interfered in the process in favour of Nicomedes multiple times. After that, Mithridates vowed to expel Romans from the Asian soil.

Mithridates VI declared war against the Romans in 88 B.C. Romans, on the other hand, mobilized a large army contingent to beat and overthrow him from power. The first war between Mithridates and the Romans occurred between 88 and 84 B.C. Roman General Lucius Cornelius Sulla drove out Mithridates from the Greek areas of Tauric Chersonese. Sulla continued to trounce Mithridates in several battles. However, upon receiving the information of some unrest back home in Rome, he hurried back there after making peace with Mithridates.

Consequent upon the peace negotiation, the second-in-command of the Roman army did not respect the treaty and again attacked Mithridates VI In the ensuing battle fought between 83 and 81 B.C, Mithridates defeated the Roman contingent at the battle of Halys in 82 B.C. Both the armies concluded the war was by declaring a treaty again. Both the above wars are known to history as the First and the Second Mithridatic War.

The Romans and the Mithridates also fought a Third Mithridatic War. The war took place between 73 and 63 B.C. In the battle of Cabira, Mithridates VI had to retreat. He fled to Armenia ruled by king Tigranes. However, within five years he bounced back and recaptured his kingdom destroying around 7000 Roman soldiers. The following year he was again defeated at the Battle of the Lycus. He escaped to Colchis after the defeat.

There are conflicting versions of his death. According to one version, Mithridates VI attempted suicide by poisoning. It is said that he was immune to poison and his suicide attempt failed because of his immunity. He then asked his Gallic bodyguard to kill him with a sword. The bodyguard obeyed, and thus the life of the greatest ruler of Pontus ended in disgrace.