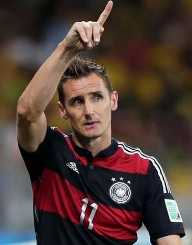 Miroslav Josef Klose was born in Silesian city of Opole, Poland on June 9, 1978. His father Josef was a professional football player and played for club Odra Opole. His mother Barbara was a member of Poland’s national women’s handball team. He and his family were ethnic Germans and after World War II decided to move to Germany.
In 1986, he joined his father in Kusel, Rhineland-Palatinate. He began playing for the village club SG Blaubach-Diedelkopf. Besides playing football, Klose also trained to become a carpenter.

When Klose was 20 years old, he began his professional career when he was switched to a reserve position from Bundesliga to FC Homburg. The following year he made a move to FC Kaiserslautern. He played for the team, making his first appearance in Bundesliga in 2000. In the 2001-02 season, Klose scored 16 goals, just two goals shy of becoming the top scorer. In 2004, Klose signed a four-year, 5 million euro deal with German Bundesliga club Werder Bremen. He made his league debut in August the same year. He announced that he would be leaving the team before the 2007-08 season.

In 2007, FC Bayern Munich announced that they had made an agreement with Werder Bremen for Klose’s transfer. He completed the medical examination for the club and was signed for four years. In his first season, Klose won his first major honors. The club won the Bundesliga and DFB-Pokal titles in a 2007-08 season, as well as the 2010 German Super Cup, where Klose scored a goal in the 81s minute. His contract lasted until the end of 2010-11 season, but since Klose did not reach an agreement with Bayern, he was transferred to Lazio club.

Miroslav Klose signed a three-year contract with Lazio and made his first score with the cub in UEFA Europa League 2012 playoffs. Despite leading a successful career with the club, Klose’s role was undermined by the coach EdyReja. In 2011, Klose scored a winning goal in the 93rd minute of the match against A.S. Roma. This occasion was tainted by some Lazio fans, holding an adapted Nazi sign to support Klose. He condemned the sign and stated that politics should stay out of the stadium.

In the 2012-13 season, Klose accidentally scored a goal with his hand in a match against Napoli. The referee did not notice it, but Klose informed him, asking to discount the goal. During this season, Lazio won the Coppa Italia. The following season began with the 2013 SupercoppaItaliana, where Lazio lost against Juventus. Klose played for the Lazio club until the end of the 2015-16 season. He became the club’s 7th highest all-time goal scorer.

In 2001, while leading his first Bundesliga season, Miroslav Klose was approached by the coach of Polish national team. He tried to pursue Klose to play for Poland in the World Cup, but Klose later decides to play for Germany. In the 2001 World Cup qualifier, Klose helped to secure Germany’s spot and lead their qualification group. In 2002 World Cup, Klose scored five headed goals. That year, Germany came in second after Brazil.

In the 2006 World Cup, Germany played against Portugal and won, securing the third place in World Cup. Klose finished as the top scorer of the tournament. He was also selected for the 2010 World Cup. During this tournament, Klose made his 100th international appearance in the match against Argentina, becoming the sixth German player to reach the landmark. In 2014, Klose announced his last appearance on the World Cup, since he wanted to have a shot at winning the Cup with Germany. During this tournament he scored his 69th international goal, becoming Germany’s record goalscorer. He also became the third player in history to score in four different World Cups. Germany went to win the World Cup in a game against Argentina. After the big win, he announced his retirement from international football.

Klose also participated in three Euro Cups. In the 2004 cup, he played in two games against Latvia and the Czech Republic, but he was not fit due to a knee injury and Germany went out in the first round. The 2008 Euro Cup was more successful, and Germany lost in finals to Spain. He also appeared in the 2012 Euro Cup.

Miroslav Klose announced his retirement on November 1, 2016. He was then invited to join the German national football team’s coaching staff.

Klose is married, and he and his wife Sylvia are raising twin sons Luan and Noah. The family speaks polish at home, while the children learn German at school. Klose was holding Polish citizenship until the age of 18.