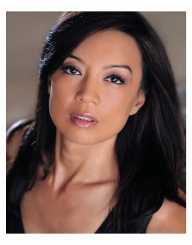 Ming-Na Wen was born on 20th November 1963 in Coloane, Portuguese Macau. Due to her parents divorcing, Wen moved to Hong Kong with her mother. Her mother remarried, and when Wen was four years of age, the family migrated to New York City.

Five years later, Wen and her family moved to Pittsburgh, Pennsylvania. Wen's parents opened a restaurant called The Chinatown Inn. Wen studied at Mount Lebanon High School. After graduation, she enrolled at Carnegie Mellon University, and she graduated in 1986.

Wen proved popular with viewers and had constant work on both television and in film. Her television appearances have been on such shows as Two and a Half Men, Boston Legal, and Stargate Universe.

Ming-Na Wen has also been in two web series and seven video games.

Nominated for seven awards, Ming-Na has won four of them. Her wins include an Annie Award and a Disney Legend Award.

Ming-Na Wen married Kirk Aanes, an American film writer, in 1990. The couple divorced in 1993. In 1995, Wen married Eric Michael Zee, and the couple has two children.