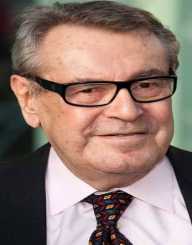 Milos Tomáš Forman was a Czech American actor, screenwriter, film director, and a professor. Born on February 18, 1932, he started his career in the then Czechoslovakia until 1968, becoming one of the leading figures of the Czechoslovakia New Wave.

Forman’s work, The Firemen’s Ball in 1967 was banned for several years in Czechoslovakia. The film highlighted the misfortunes in a provincial town, which authorities in the country regarded as a dent on Eastern European Communism. He since left the country for the United States where his films One Flew Over the Cuckoo’s Nest, 1975 and Amadeus, 1984, won him an Academy Award for Best Director.

One Flew Over the Cuckoo’s Nest also won Actor in Leading Role, Best Picture, Actress in Leading Role, and Screenplay at the Academy Awards becoming the second film to win all such major awards after It Happened One Night in 1934. Milos Forman received several awards including Golden Globe, BAFTA, and Cannes.

Milos Tomáš Forman was born on February 18, 1932, in Caslav, Czechoslovakia (Czech Republic) to Anna and Jewish architect and Holocaust survivor Otto Kohn. As a child, he thought his stepfather Professor Rudolf Forman was his biological father.

Anna died in Auschwitz in 1943. Rudolf also died in the Mittelbau-Dora concentration camp in 1944, after he was arrested for circulating banned and being a member of the anti-Nazi underground. Now an orphan, Forman was raised by his uncles and family friends. Growing up, Forman gained interest in theatre and envisioned to become a theatrical producer.

Milos Forman received education at King George boarding school in Podebrady. His schoolmates included filmmakers Jerzy Skolimowski and Ivan Passer. He later enrolled at the Academy of Performing Arts in Prague where he studied screenwriting. He left Czechoslovakia to the United States in 1968, during the Warsaw Pact invasion.

Milos Forman worked with Ivan Passer and cinematographer Miroslav Ondricek for the silent documentary Semafor, which was about Semafor theatre. He worked on several other minor projects until his first major work, the documentary, Audition, about competing singers.

Forman directed several works including Loves of the Blonde, which won awards at the Locarno and Venice film festivals. He then directed the Firemen’s Ball, which was one of the best movies of the Czechoslovak New Wave.

The film was however considered as a biting satire of East European Communism, hence, was banned for many years in Czechoslovakia. After being fired by his employer a Czech studio coupled with the invasion, Czechoslovakia forced him to leave for the United States in 1968.

A career in the US

Milos Forman's first movie in the United States was Taking Off, starring Buck Henry and Lynn Carlin. It won the Grand Prix at the Cannes Film Festival in 1971. The film received negative reviews taking Forman out of work.

After some years of being out of work, producers Saul Zaentz and Michael Douglas hired him to direct One Flew Over the Cuckoo’s Nest, a film adaptation of Ken Kesey’s cult novel of the same name. The film, which starred Louise Fletcher and Jack Nicholson, became very successful critically and commercially. It received five awards at the Academy Awards including Best Director, Best Adapted Screenplay, Best Actor, and Best Actress.

Milos Forman settled in New York, where he would become a professor of film at the Columbia University in 1978. He was also a co-chair of the film department. He naturalized to become a United States citizen in 1977. He was head of the Cannes film festival in 1985 and the Venice festival in 2000.

Milos Tomáš Forman married three times first to actress Jana Brejchova in 1958 and divorced after four years. He then married actress V?ra K?esadlová, with whom he had twin sons Petr and Mat?j Forman.