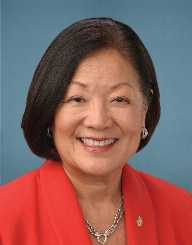 Mazie Keiko Hirono was born 3rd November 1947, in Koori, Fukushima Prefecture, Japan. She had two siblings, one older and one younger, and she came from a family where her mother was in an abusive relationship with her father.

In 1955, Mazie Hirono returned to Hawaii with her mother and one of her brothers. Her other brother and her grandparents followed in 1957. The family grew up with little money.

Hirono studied at Kaimuki High School, and after graduating, enrolled at the University of Hawaii. She graduated in 1970 with a degree in psychology. Hirono then relocated to study at Georgetown University Law Center, and in 1978 she graduated with her law degree.

After graduating with her law degree, Mazie Hirono moved back to Honolulu, and she worked as a lawyer. Hirono decided to enter politics, as a Democrat, and in 1980 she was elected to the House of Representatives. Over the next 14 years, Mazie Hirono was re-elected four times, to four different seats, due to continual redistricting in Hawaii.

Mazie Hirono passed over 120 laws while she was in the House, and her main committee assignment was as Chairman of the Consumer Protection and Commerce Committee. Hirono then retired from the House of Representatives in 1994 to run in the State elections.

In 1994, Hirono was successful in running for Lieutenant Governor. Her main portfolio in that position was the educational sector, being President of the National Commission on Teaching. Her role as Lieutenant Governor finished in 2002.

In 2006, Mazie Hirono once again ran for a seat in the House of Representatives and won. She was successfully re-elected in both 2008 and 2010.

In 2011, Hirono announced that she would be running for a seat in the U.S. Senate. Hirono successfully won the seat in the general elections in 2012, and she won re-election in 2018.

During her two terms, Mazie Hirono served on six committees, once again including the Committee on Armed Services and the Committee on the Judiciary. She served on eight sub-committees. Hirono was also a member of the Congressional NextGen 9-1-1 Caucus.H iron has also been a firm advocate of gun control.

In 1987, Mazie Hirono married Leighton Kim Oshima. In 2017, she was diagnosed with stage 4 kidney cancer. She had her right kidney removed on 17th May, and she returned to speak in the Senate on 22nd May 2017.