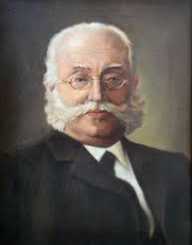 Max Eyth was a German engineer, innovator, and writer born in 1836 and died in 1906. The graduate of the University of Stuttgart was the founder of the German Agricultural Society. His knowledge and love for machinery gave him the opportunity to travels on behalf of John Fowler, a steam-traction engineer. He would later write novels and plays based on his travel experiences.

Max Eyth was born to Edward Eyth and Julie in Kirchheim Unter Teck, Germany on May 6, 1836. Edward was a history and Greek teacher born in 1809 and died in 1884. Also, Edward and Julie just like their son were writers. His father mainly wrote books on literature and history.

Max attended schools in Heilbronn as a boy. Thereafter, from 1856, he studied mechanical engineering in Polytechnikum Stuttgart till 1856. He received his first-hand experience from Gotthilf Kuhn in Berg, a steam engine factory located near Stuttgart.

Max Eyth joined plow factory John Fowler situated in Leeds in 1862. This is where he got to explore the world through the many travels he took on behalf of Fowler.

He toured many foreign countries including the United States. His trip to Egypt was at the time of the American Civil War. It was at that time that Europe’s main producer was to become Egypt.

In 1884, the German Agricultural Society, DLG, was founded by Max. Also, he wrote many books based on his engineering knowledge as well as his travel experiences.