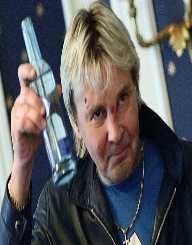 Matti  Nykanen is a pop singer and the most converted former Finish ski jumper. Born on July 17, 1963, he is acclaimed as the greatest ski jumper of all time. His career as a ski jumper was synonymous with medals as Matti  Nykanen won five Winter Olympic medals including four gold, nine World Championship medals including five gold and 13 gold out of the 22 medals won at the Finnish Championships. His remarkable performance at the 1988 Winter Olympic winning three gold medals made him alongside Yvonne van Gennip of the Netherlands, the most successful athletes of the event.

Matti  Nykanen shares a record with Adam Malysz and Sara Takanashi as the all-time best with four World Cup titles. After a successful career in ski jumping, Matti  Nykanen ventured into singing with his debut album Yllätysten yö, released in 1992. The albums made over 25,000 copies sale. Matti  Nykanen has also not stayed away from trouble and has been sentenced twice, first in 2004 when Matti  Nykanen was sentenced to 26 months for stabbing and also 16 months in 2009 for assault on his wife.

Matti  Nykanen was born on  July 17, 1963, in Finland. Much is not known about his childhood life, but it is known that he had aninterest in ski jumping at the age eight. This interest turned into his professional career.

Matti  Nykanen professional ski jumping career started at age 18 when he stepped in the sports. His instant success took everyone by surprise, but the most was yet to come. Matti  Nykanen won gold at the FIS Junior World Championship and also won a medal in the World Cup championships. Matti  Nykanen soon became a force to reckon with in the sport, and that was proved during the 1984 Winter Olympics in Sarajevo. He won a gold medal during the event with a record of 17.5-point which was the largest margin of victory in Olympic ski jumping. During the 1988 Winter Olympics in Calgary, he became the first ever ski jumper to gold medals on both hills

Matti  Nykanen also made a record with a flew of 191 meters in Planica in 1985 but was broken by Piotr Fijas with his 194 meters. With his stunning performance, Matti  Nykanen has become arguably the greatest ski jumper to have ever graced the game. His splendorous career saw him win nine World Championship medals with five gold; he was a two-time winner of the Four Hills Tournament. Matti  Nykanen has five Winter Olympic medals with four gold, five medals in the FIS Flying World Championship among several others and a total of 46 World Cup championship wins. He officially retired from the game in 1991.

Matti  Nykanen has been married four times. His first wife was Tiina Hassinen from 1986 to 1988 and had a son. He went on to marry Pia Hynninen also from1989 to 1991 and has a daughter. From 1996 to 1998, Matti  Nykanen married Sari Paanala which made him change his surname to Paanala during the marriage. After their divorce, he went on to marry his fourth with Mervi Tapola, a millionaire sausage heiress who he met in 1999 and married in 2001 but divorced in 2003. The two remarried again in 2004, but in August 2010, Tapola made a request for a divorce.

Matti  Nykanen marriage to Tapola was characterised by several cases of abuse and threats. The first of this kind was reported in June 2000when he assaulted Tapola leading to a restraining order imposed on him. In 2004, he assaulted her again and this time was handed a suspended sentence and was put on probation for another assault in September 2005. On March 16, 2006, he imprisoned for four months, for stabbing a man at a pizza restaurant in Korpilahti. While serving his prison term, Tapola requested for a divorce but later rescinded her decision. Nykanen continued his assault on his Tapola with another one happening on Christmas Day in 2009 when he injured Tapola with a knife and tried to throttle her with a bathrobe belt.

Matti  Nykanen was after and charged with an attempted manslaughter but was released for insufficient evidence and charges dropped on December 28, same year. Nykanen assaulted Tapola again but this time was convicted and sentenced to 16 months in jail in August 2010. Matti  Nykanen was also ordered to pay€ 5,000 as compensation for pain and emotional trauma and € 3,000 for her legal fees. Nike en had previously on August 24, 2004, been arrested and convicted for 26 months in October 2004 for an attempted manslaughter of a friend after losing a finger pulling competition in Tottijarvi, Nokia.  Since he was a first-time offender, he was released in September 2005.

Matti  Nykanen ventured into music during the climax of his ski jumping career after some businessmen offered him a singing career. He accepted the deal and in 1992 released his debut album Yllätysten yö, which sold over 25,000 copies. He was awarded a golden record making him the second Olympic gold medalist after Tapio Rautavaara to receive the award. In 1993, he released his second album Samurai, but that was not successful.

He went into musical hiatus and within that time worked as a stripper in Jarvenpaa restaurant due to financial difficulties. After almost a decade, Matti  Nykanen returned to music with the release of the single, "Ehkä otin, ehkä en." His last album was Ehkä otin, ehkä en released in 2006. He worked with musician Jussi Niemi on most of his songs and toured across Finland with the Samurai ensemble led by Niemi to perform two to three times a week.