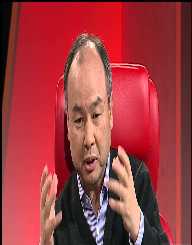 Masayoshi Son was born on 11 August 1957, in Tosu, Saga Prefecture, Japan. He hailed from a second generation Zainichi Korean ancestry. His ancestors relocated to Japan from Korea. During his childhood, he used his family’s adopted Japanese surname Yasumoto. His original Korean name was Son Jeong-ui. From a very young age, he was fascinated about America and to add fuel to the fire, Japan McDonald's President Den Fujita inspired him to go to America for further studies. Initially, Masayoshi went to America for a short duration abroad study program.

At the age of 16, Masayoshi Son left Japan and went to California, USA, for a longer duration of study. He attended Serramonte High School, situated south of San Francisco while staying there with family and friends. After completion of his high school graduation, he enrolled at Holy Names University, a local college. He studied there for the next two years and then got transferred to the University of California-Berkeley, where he majored in Economics and also studied Computer Science. Soon he realized that Computer Technology would bring about the next commercial and industrial revolution of the world and he would be able to make a fortune dealing in microchips.

Masayoshi Son started procuring early consoles of Pac-Man and Space Invaders and leased them to local bars and restaurants in Northern California while undergoing his undergraduate course in UC Berkeley. His father owned a pachinko parlor (a Japanese style pinball game) in Japan. He supplied the early edition of arcade games to his father’s parlor and reportedly earned his first million dollars through these arcade games. He also created the pocket translator and patented the device. Then he started cold-calling companies for acquisition of the device. Sharp Electronics finally bought it for US $ one million.

Masayoshi Son started a company called Unison in Oakland, California, soon after completing his graduation in 1980. He later sold this company to Japanese multinational Kyocera. In 1981, he came back to Japan and started a software distribution company in the name of Nihon SoftBank. It was later renamed as SoftBank. Venturing into the Electronics and Telecommunication sector, he halted the telephone service monopoly of the Japanese Government by offering fixed line telephone subscribers the option to choose service providers with the cheapest rates.

Masayoshi Son struck an exclusive deal with Osaka Electronics retailers Joshin and prime software developer Hudson. The deals materialized to be financially beneficial, and within a few years, SoftBank proceeded to become the top emerging computer industry of Japan. By 1984, SoftBank was able to capture around 50% retail market share of computer software of the country. He further ventured into the business of telephone-routing device, magazine publishing, the Comdex trade show, and broadband internet service after the initial success of computer software business.

Masayoshi Son established Yahoo! Broadband in September 2001 with Yahoo! Japan and obtained a controlling stake in it. Due to devaluation in SoftBank’s equity, Masayoshi concentrated his attention on Yahoo! BB and BB Phone. In spite of an accumulated debt of $1.3 billion on account of SoftBank, Yahoo! BB acquired Japan Telecom. At the time of the acquisition, Japan Telecom was Japan’s third largest broadband and landline provider with 600,000 residential and 170,000 commercial subscribers. The acquisition enabled Yahoo! BB to emerge as the leading broadband service provider in Japan.

In 2000, Masayoshi Son invested $20 million in a new Chinese e-commerce company called Alibaba. The investment bore fruit as Alibaba witnessed remarkable growth over the years and in 2014, Alibaba’s initial public offering valued SoftBank’s stake at more than $50 billion. The longtime target of Masayoshi to enter the buoyant mobile market was accomplished when on March 17, 2006, Vodafone group announced selling Vodafone K.K. to SoftBank for approximately 1.75 trillion Japanese yen (about US $15.1 billion).

Before the acquisition, Vodafone K.K. was on the verge of collapse. However, Masayoshi Son brought the company back into reckoning and re-established the company's supremacy into Japan’s mobile industry. SoftBank Mobile is the most profitable telecom firm in Japan.

In 2013, Masayoshi Son bought 76% share of Sprint Nextel, an American Telecommunications holding company, the fourth largest wireless network operator of that country. At $22 billion, it is the most significant foreign acquisition by a Japanese firm to date. He has also invested substantially in solar power project and is a bitter critic of Japan’s nuclear power program especially after the Fukushima Daiichi nuclear disaster in 2011.

Among the many ventures Masayoshi Son launched, there were substantial failures and substantial financial losses in some of them. In the late 1990s, he lost around a billion dollars in Kingston Technologies. However, it was the dot-com crash of 2000 which robbed him of an unprecedented amount of approximately $70 billion. The amount of loss was so big that he became the person having the distinction of losing the most money in history. However, even the loss of such magnitude could not deter him, and he steadfastly began rebuilding his fortune with steely resolve and determination. At an estimated net worth of US $20.4 billion, he is presently the wealthiest person in Japan.

Masayoshi Son is a married person with two sons. He is a well-known philanthropist. After the 2011 tsunami and the Fukushima Daiichi nuclear disaster, he donated around $120 million for relief and rescue operations and pledged to give his yearly salary till his retirement for the rehabilitation of the victims.

On the personal front, Masayoshi Son bought a $117.5 million palace in Woodside, California. It is the most expensive residence in California. The price paid for the purchase is the second highest price paid for buying a house in the entire United States. He is also the proud owner of a 13,000 square feet house in the Azabu Nagasaki neighborhood of Tokyo worth $45 million. In 2013, he was named the world's 45th most powerful person by Forbes Magazine's ‘List of The World's Most Powerful People.’