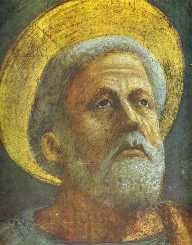 Masaccio was the first significant Italian painter of early Renaissance. He has been able to recreate exact figures, and his paintings also give a convincing sense of three dimensionalities. He died young but in a short span of six years radically transformed Florentine painting.

The name Masaccio is a humorous version of Maso (short for Tommaso) meaning ‘clumsy Tom.’ His main collaborator was also Maso and later came to be known as Masolina (delicate Tom). Renaissance painters began as apprentices with established masters before starting on their own. There is, however, no record of Masaccio’s training. The earliest record is when he joined the Guild as an independent master on 7 Jan 1422.
Initial works of Masaccio

This was the first work attributed to Masaccio. It is now in the Museum of Cascia di Reggello near Florence. This altarpiece was discovered in 1961 in the church of Giovenale at Cascia di Reggello near his hometown. A triptych is a painting in three parts often used as an altarpiece. The middle panel has Virgin Mary and Christ child on a throne. The side panels (wings) show two saints, Bartholomew and Blaise. Two little angels are shown kneeling in front of the Virgin Mary.

The uniqueness of this painting is that the angels are shown from the back. This is an invitation for the observer to kneel and worship and feel part of the scene. The three-dimensional effect and lack of abundant decoration make this painting different from other paintings of that period.

This painting was done in collaboration with Masolino di Panicale. Masolino is believed to have painted St Anne and Masaccio Virgin and Child. Masolino’s figures are delicate but Masaccio’s more robust and hefty.

Masaccio made friends with Donatello and Brunelleschi. He went to Rome with his friends and visited the ancient ruins of Rome. He was impressed with the sculptors of the previous age. He noted that each figure showed possessions. This distinctive feature made them look like real individual people. This inspired and influenced his later works which were free of Gothic and Byzantine influence.

In 1424 Masaccio and Masolino were commissioned to paint series of frescoes by Felici Branacci for the Branacci Chapel.  Masaccio painted murals showing the life of St Peter. Two scenes on either side of the chapel space depict “The temptation and expulsion of Adam and Eve.” Michelangelo was said to be significantly influenced by this fresco.

Another major work is “The Tribute Money.” This shows Jesus and his apostles. The distinct feature is that the shadows of the figures all fall away from the chapel window as if lit by it.

“Resurrection of the son of Theophilus”. A pavement scene is shown. The buildings and people are shown proportionate to their surroundings. The rules of perspective applied to give it a three-dimensional effect.

The work in the chapel was left unfinished and the reasons unclear. One probable cause given is declining finances of Felici. Filipino Lippi later completed the work in 1480.

On 19 Feb 1426, v was commissioned to paint the Pisa Altarpiece at the Santa Maria church at Carmine in Pisa. This work was dismantled and later dispersed in the 18th century. The central panel “The Madonna & Child” is now in National Gallery, London. Though the panel is damaged, Masaccio’s perspective depiction is visible.

Around 1427 Masaccio was commissioned to produce a Holy Trinity for the Church of Santa Maria Novella in Florence. This is considered by many as his masterpiece. It shows the Holy Trinity or God in three forms, i.e., Father, Son, and the Holy Spirit. The sacred figures and donors (represented as kneeling figures) are shown above an image of a skeleton lying on a sarcophagus with a Latin inscription. The Holy Spirit is shown as a dove above Jesus.

There have been other paintings of Masaccio but, only four frescos are undoubtedly attributed to him. Many of his works have been destroyed. Masaccio‘s influence can be seen in the paintings of Fra Angelico, Piero Della Francesca, and Michelangelo.