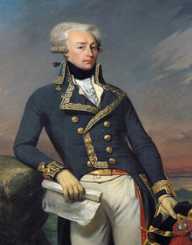 Marie Joseph Paul Yves Roche Gilbert du Motier, Marquis de Lafayette was born in Cahvaniac, France on September 6, 1757. He came from a family of a noble military lineage. His father Michel Lois Christophe Roch Gilbert Paulette du Motier, Marquis de La Fayette was a colonel of grenadiers. His father died on the battlefield in 1759 when a cannonball struck him in the Battle of Minden in Westphalia.

In 1768, Lafayette went to Paris to live with his mother and great-grandfather in Luxembourg Palace. He was educated at the College du Plessis, University of Paris and decided to pursue the family tradition of military service. In 1771, Lafayette was commissioned as an officer in the Musketeers as sous-lieutenant, and his duties mostly included ceremonial parades and presentations. He was 14 years old at the time.

During this time, the Duc d’Aven, Jean-Paul-Francois de Noailles was looking for a husband to his 12-year-old daughter Marie Adrienne Francoise. The marriage plans were settled but kept in secret for two years, during which the two fell in love and married in 1774.

After getting married, Lafayette and his wife lived in Versailles. He continued his education there at the Academie de Versailles and was given the commission as a lieutenant in the Noailles Dragoons. In 1775, he took part in training in Metz and made the commander of the Army of the East. He and Marquis de Ruffec discussed the revolt against British rule in North American colonies. In 1775, he received the captaincy in the Dragoons and became more interested in the American Revolution. In 1776, he was enlisted as the major general in the military to America.

In 1777, Lafayette sailed to the United States and joined the uprising. He used his funds to sail to America. His first battle was in September at the Battle of Brandywine. During the fight, he was shot in the leg, and General George Washington requested specialized medical care for him, which ignited a strong friendship between the two until Washington’s death.

Lafayette spent the winter of 1777 in Valley Forge and made his name as an intelligent leader, who drew more French resources to the army. In 1778, he led the battle at Bunker Hill, which was later named in his name. In 1781, he became the commander of the Virginia Continental forces and helped to defeat the General Lord Cornwallis’s army at Yorktown.

Upon his return to France in 1781, Lafayette was known as the Hero of Two Worlds. He then joined the French army. Lafayette organized several trade agreements with Thomas Jefferson, who was at the time the American ambassador to France. At the time, France was on the verge of political and social upheaval. Lafayette drafted the Declaration of the Rights of Man and the Citizen and advocated for a governmental body to represent all three social classes.

In 1789, Lafayette became the commander of the Paris National Guard. When violence broke out in the city, his obligation was to protect the Royal family. In 1792, Lafayette decided to flee the country but was captured in Austria. He returned to France in 1799.

When Napoleon Bonaparte took power as the emperor of France, Lafayette kept a low profile. During the Hundred Days, he was elected to the Chamber of Deputies and argued for Napoleon’s abdication after the defeat at the Battle of Waterloo in 1815. In 1830, Charles X was overthrown during the July Revolution. Lafayette was given the opportunity to become a dictator, but he passed to Louis-Philippe and was reestablished as the commander of the National Guard.

During his last years, Lafayette became increasingly disillusioned with the rule of Louis-Philippe. Lafayette promoted his liberal proposals and in 1831 was elected as the mayor of the village f La Grange and to the council of Seine-et-Marne. Despite his efforts, riots on the streets continued, and the barricade was erected at the Place de la Bastille. He spoke publicly in the Chamber of Deputies for the last time on January 3, 1834. After a month, he got ill with pneumonia but recovered. The following year, he was caught in a thunderstorm and was bedridden until his death on May 20, 1834.