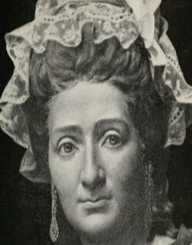 Anna Maria ‘Marie’ Tussaud was born on December 1, 1761. She was a French artist. She was popularly known for her sculptures. She founded the Madame Tussauds, a wax museum in London. She died on April 16, 1850, at the age of eighty eight.

Anna Maria ‘Marie’ Tussaud was born on December 1, 1761, in Strasbourg in France. She was born to Joseph Grosholtz and Anne Marie Walder. Her father died in the Seven Years’ War two months before she was born. At the age of six, she and her mother moved to Bern in Switzerland where they moved into the home of Doctor Philippe Curtius. Her mother was a housekeeper in residence. Philippe was also good when it came to wax modelling, and so he taught Anna the same.

Philippe later moved to Paris where Marie Tussaud and her mother joined him. In 1770, there was a wax exhibition organised by Philippe which attracted a crowd. In 1776, he moved the display to Palais Royal. In 1782, he established another exhibit titled Cavern of the Grand Thieves. Anna learnt wax modelling first, and so she started working for Philippe as an artist.

In 1777, Marie Tussaud made her debut in the wax modelling business with the figure of Voltaire. From 1780 to 1789, she created figures of celebrities such as Benjamin Franklin, Jacques Rousseau, and Voltaire. She later was employed to teach votive making to Elisabeth who was the sister to Louis XVI. She was then invited to live at the Versailles for nine years because the royal family was pleased with her work.

In 1789, during the French Revolution, she was considered a royal sympathiser in the Reign of Terror, and so she was arrested. In preparation for her execution, she was cleanly shaven by guillotine. She was however released with the help of Collot d’Herbois’. She later started making death masks for the French Revolution’s victims such as Marat, Louis XVI, and Marie Antoinette among others. In 1794, Philippe passed away and left his wax works to Anna. In 1795, she got married to Francois Tussaud who was a civil engineer. Together they had three children, a daughter, and two sons.

In 1802, Marie Tussaud travelled to London to present her collection of portraits after the Treaty of Amiens. She was to exhibit her work at Paul Philidor’s show at the Lyceum Theatre. Paul was a magic lantern and phantasmagoria. In 1803, she moved to Edinburgh since she was struggling financially. After the Napoleonic Wars, she was unable to go to France. She therefore resorted to travelling with her collection throughout the British Isles.

In her travels, Marie Tussaud had her son Joseph and later on, she reunited with Francois who joined her. Her husband remained in France, and they never saw each other again. In 1835, she founded her exhibition, Baker Street. Three years later, she wrote her memoirs. In 1842, she created her portrait which is fully displayed at the entrance of her museum.