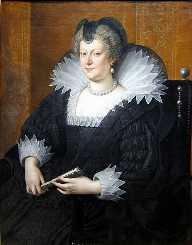 Her mother died when Maria de’ Medici was very young, and although somewhat neglected by her father, she still received a good education, as was the family tradition. Medici also received a good grounding in fine arts.

In October 1600, Maria de’ Medici married Henry IV of France, after the annulment of his first marriage. Henry married by proxy, not even bothering to turn up for his wedding. The ceremony took place in Florence, Italy.

Maria de’ Medici hosted 4,000 guests at a lavish reception. Part of her dowry was the sum of 600,000 crowns, which enabled Henry to get himself out of debt.

The heir to the throne, King Louis XIII, was born the following year at Fontainebleau.

The only reason Henry married Maria de’ Medici was due to him owing her father a massive sum of money, and the only way of settling the debt was to take Medici as his wife. His first wife hadn’t produced any children, which was why Henry had to find another wife.

Henry had many mistresses, which he didn’t bother to try and conceal much to the chagrin of Maria de’ Medici. She had sympathy for Henry’s first wife, and what she had had to put up with, and due to Medici’s feelings on the subject, Henry allowed his first wife back into the kingdom from exile.

Although the marriage successfully produced children, the marriage itself was not happy. She was continually fighting with Henry’s mistresses.

On 13th May 1610, the day after Henry was assassinated Maria de’ Medici was crowned the Queen of France. Her first order of business was to banish his mistress, Catherine Henriette de Balzac, from the court.

It was well-known that Henry had not been wealthy, but Maria de’ Medici had her own money. Her significant contribution was the building and furnishing of the Palais du Luxembourg. Construction began in 1615. Not only did she finance several projects in the building area, but she also financed several expeditions, including the one to North America, which in turn, saw France claim Canada.

Maria de’ Medici, unfortunately, was largely influenced by her maid, Leonora Galigai Dori. She had no political awareness and relied heavily on her maid. Dori’s husband was Concino Concini, known for his questionable conduct. With their influence, she made Concini a Marshal of France, dismissed the Duke of Sully who had been a competent minister, and the Roman Catholic Church was also able to start asserting influence and suppressing Protestantism subtly.

In 1617, her son, Louis XIII, exerted his right to rule as King. He had Concini executed and exiled his mother. She escaped from Blois, where she was being held, in February 1619. By 1621, Maria de’ Medici was allowed to return to the royal council, thanks to the mediation of one of the King’s advisors, named Richelieu.

Maria de’ Medici tried at one stage to have Richelieu removed from his position, but underestimated his closeness to the King. Her coup failed, and she fled to Compiegne in 1630. She then escaped to Brussels in 1631, and finally Amsterdam in 1638.

Henrietta Maria married Charles I, King of England, to become Queen of England.