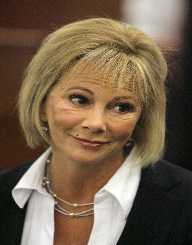 One of Marcia Clark’s earliest law career began in 1981 when she began working as a prosecutor for the Los Angeles District Attorney. Over the course of her law career, Marcia Clark worked as a lawyer on many cases that engaged the public because of either their brutality or because of the celebrities involved.

One of Marcia Clark’s earliest celebrity cases took place in 1991. Marcia Clark worked against Robert John Bardo, who was accused of murdering the actress Rebecca Schaeffer. Bardo had previously stalked the actress, so he knew where she lived. He grew obsessed with her. In the film Screens from Class Struggles in Beverly Hills, Schaeffer performed a sex scene, which angered Bardo. Then, in July 1989, he confronted Schaeffer in her home and shot her. After his arrest, the trial began. His defense tried to have him declared insane, as he had schizophrenia. However, this did not work. He was later sentenced to life in prison for first-degree murder.

In 1994, Marcia Clark was faced with another famous case. She worked with Christopher Darden (another famous lawyer) on the O.J. Simpson case, in which he was accused of murdering Nicole Brown Simpson (his ex-wife) and Ron Goldman (Nicole's lover). Clark was a member of the prosecution in this case. Teamed up with Darden, Clark faced an incredibly talented defense team, which included F. Lee Bailey, Johnnie Cochran, Robert Kardashian, and Robert Shapiro.

During the case, the press covered every second of what went on in the courtroom and even spent some time focusing on the personal and professional lives of the lawyers involved with the case, including Clark. She did her best to ignore this, and to encourage the jury to ignore this as well. Marcia Clark asked them to focus on the evidence, which there was plenty of. However, after ten months of trials, the jury declared O.J. Simpson innocent.

Marcia Clark resigned from her job at the District Attorney’s office shortly after the O.J. Simpson trial.

Since the late 1990’s, Marcia Clark has often appeared on news shows. She has worked as a special correspondent for Entertainment Tonight and has also appeared on Headline News.

In 1997, Marcia Clark wrote a memoir called Without a Doubt. The book was written with Teresa Carpenter. The memoir told the true story of what Clark did and felt during the O.J. Simpson case. The book mentioned how Clark was sure Simpson committed the crime and talked about the evidence that was stacked against him.

In more recent years, Marcia Clark has also taken to writing crime mystery stories. Her most famous books fall into the Rachel Knight and Samantha Brinkman series. Both of these series revolve around women who solve crimes. Some of her most famous novels are listed below.