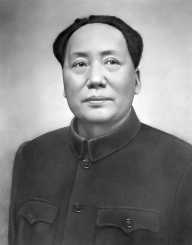 Mao Zedong was a Chinese politician, communist revolutionary and socio-political theorist. He was a famous individual for both his good and controversial deeds.  He was named Chairman Mao during his political career. He established the People’s Republic of China in 1949. During his studies in Changsha, Zedong became an active member of revolutionary activities. He also became a member of the rebel army as a private soldier. Till the time of his death, he led the Communist Party of his country China. It was a disastrous Revolution leading to the loss of millions of lives. His efforts to stop the revolution bore fruits after his death

Mao Zedong was also known as Mao Tse-tung was born on December 26th, 1893 to a wealthy family. His place of birth was Shaoshan situated in Imperial China.  He was the son to Wen Qimei, a prosperous farmer, and Mao Yichang. He had three siblings. When he was not studying, he helped out his father in the field.

Mao Zedong began his education in Shaoshan Primary School. His primary interest during his education was in popular novels. His attempt to flee his home at the age of eleven fell in a dead end. His father forcefully brought his back home. He was, therefore, able to finish his early education two years later. After he read a book by Zheng Guanying, his interest in politics kicked off. Among his most celebrated role models in politics were Napoleon Bonaparte and George Washington

In 1911, Mao Zedong attended secondary school in Changsha. During this time he participated actively in revolutionary activities that were ongoing in Changsha. He even joined rebel army later as a private soldier. He quit his studies in Changsha School later upon which he studied on his own at the library. He then attended the teacher training college in Changsha where he trained to be a teacher. By June 1919, he was done with his studies hence graduated from the school.

Among Mao Zedong's first work to be published was A Study of Physical Culture. It appeared in the New Youth radical newspaper. This was during his studies at the teacher training college. This feature aimed to urge people to be more involved in the revolution.  Meanwhile, he was among the leaders of the revolutionary events that took place in the college. He was appointed the Students Society’s secretary. He also served as the volunteer army of the college.

After his graduation, Mao Zedong served at Beijing University as an assistant librarian. During this time he co-founded the communist Soviet Union. He later quit his job at the library. He then taught at the Xiuye Primary School. The school was situated in Changsha.

Mao Zedong was among the founders of the Hunanese Student Association. He also helped establish Xiang River Review, a radical newspaper that was published weekly. He became an inaugural member the Communist Party of China which was formed in 1921. He became a very active member of the Communist Party. He later established the Cultural Revolution which led to a disaster. Many schools closed down after the revolution. It is also believed that this revolution led to the loss of millions of people.  Zedong then decided to put an end to the revolution in 1969.

Mao Zedong was only 13 when he married the first of his four wives.  The first one was an arranged marriage to Luo Yixiu. He did not appreciate her as his wife. He therefore later married his second wife, Yang Kaihui. Together they had three children. Yang Kaihui later passed on. Zedong then married once again to He Zizhen. The couple was blessed with six children, and later his wife died. At the time of his death, he was married to Jiang Qing. During their time together they had a daughter.

Mao Zedong took his last breath on September 9th, 1976. He was 82 years old at the time of his death. After his death, the disastrous Cultural Revolution eventually came to an end.