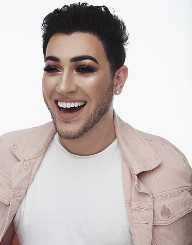 Gone are the days where we defined an individual according to his or her career path. I believe we all have different interests, skills, experiences and most of all different expectations in life. That is why a young teen like Manny opted to forgo his medical certificate to chase his dreams. He is known as a professional makeup artist, and there is no doubt that his face defines his passion for makeup. His pseudonym name MannyMUA famously knows him. He gained profound success when he joined YouTube channel in 2014 and less than eight months he had over 200K followers. He is now a promising YouTuber who actively post his beauty hacks and DIYs to over 2million subscribers.

MannyMUA comes with a sense of sincerity, and he prefers nothing else than pure truth in everything he does. He is a self-determined guy who appreciates hospitable friends. For him to advance further, he needs to diversify more as well as gathering enough resources. It’s quite hard to find a person who is imaginative and at the same time efficient. But Manny has proved to us that such kind of beings still lives amongst us. Above all, he hates defeat just as much as he loves to have an enterprising life. All ages love him due to his noble and charming personality. Controversy is the word that Manny hates to utter and he hates to include it as part of his life. His good relation with other Vloggers makes him be the ‘chosen few’ in the entertainment industry. He also helps other teens to understand that people come with natural born talents.

On April 4, 1991, Manny Gutierrez was first seen in the world in San Diego, California. He comes from an inordinately educated family, and there is no doubt that he once wanted to follow their profession. He was lucky to have a lovely and caring family who still adore him to the core. He can’t complain more. Manny was an excellent student who excelled profoundly. His family opted to choose for him a prestigious career. It came to a point where he was pressurized to further his education and have a promising job at the end. It was here that he joined a major medical school in the USA. After several months Manny opted to quit from his faculty of medicine.

To further his reach in the world of fame, Manny collaborated with other Viner’s including Jaclyn Hill, a fashion blogger. Hill and Manny started to post beauty suggestions and tips to their fans. It was here that they came up with a collective name New Jaclyn Hill Morphe Palette for their join videos. At the end of it all, Manny saw the light at the end of the tunnel. He increased his fans, and more subscribers tapped the following button. He is currently the best makeup YouTuber who makes tons of money through small ads that are usually posted on his YouTube videos.

Early in 2016, Manny came out as a gay where he released a video called My Coming out Story the same year. To date, some people or teens don’t understand why Manny rose to fame as a celeb. To answer the most trending question, I would simply say that the 21st generation welcomes his new tricks. He knows how to come up with simple makeup styles. His end motive is to change the norm of how males view the makeup industry as women’s world. Gutierrez has given us a platform to understand that we all have unique talents and we should all know where our natural talents lie.