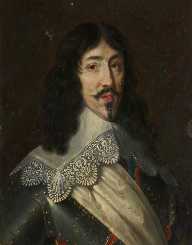 Louis XIII of France was born on September 27, 1601. He was the second king from the House Bourbon to rule France. He ascended the throne at the age of eight and ruled until 1643 when he died.

Louis XIII of France was born in September 27, 1601 at Chateau de Fontainebleau. He was born to King Henry IV of France and Queen Marie de Medici. He was brought up alongside five siblings. He was named the Dauphin of France when he was born.

In 1610, Louis XIII became the King of France after his father died. He was only eight years old, and so his mother was appointed as his regent. In 1614 Henri who was the Prince of Conde who was second in line to the throne lead a rebellion against the throne which was not successful. He came of age in the same year, and he has therefore pronounced the official monarch of France.  Power did not, however, shift to him as his mother still retained control over France as his regent. In 1615, Henri led a second rebellion which was also unsuccessful as he was arrested by the Queen and her advisor Concini Concino.

In 1617, Concini was assassinated, and Louis XIII of France sent his mother to exile in Chateau de Blois. In the same year, King Louis took control of the kingdom. He ruled the nation under the guidance of Charles d’Albert whom he made Duke of Luynes. In 1618, when the Thirty Years War between the Catholics and the Protestants started, he supported the Habsburg Ferdinand II who was the Holy Roman Emperor against the advice that was given to him by the noblemen. In the same year, he got rid of Paulette tax which further made the noblemen angry.

The Queen mother later led two unsuccessful rebellions against her son. In 1620, the royal force got rid of the rebels. One year later the Queen mother reunited with his son with the help of Richelieu who was the Queen Mother’s advisor. In 1619, he sent a fleet to Morocco under Isaac Razilly to set up base there since he was exploring colonial ventures. He later sent a fleet to Japan to fight the Dutch in the Far East. In 1621, Charles and Louis XIII went on an unsuccessful mission to Huguenot where Charles became a victim of camp fever which had killed so many people. Charles later died, and Louis formed a Council of Minister who would assist him in governing the kingdom.

In 1622, the Queen Mother became a member of the newly established Council. Later the same year Louis XIII signed a treaty with the Duke of Roahan ending the rebellion by the Huguenots. In 1624, Richelieu became the chief advisor of the King. The Queen Mother was not happy with the influence that Richelieu was having on Louis, so she talked to her son to remove him as his advisor. Due to her appeal, she was sent back to exile. France grew with the rule of Louis as he established an absolute monarchy and strengthened the navy. He also encouraged and promoted the peaceful co-existence between the Indians and the colonialists. In 1627, he declared that any Indians converting to Catholicism was to be treated as natural citizens of France. On the advice of Richelieu, he also established the Academie Francaise for the development of the French language.

In 1615, Louis XIII married Anne of Austria, daughter of the King of Spain with whom he had two sons, Louis XIV of France and Philippe I the Duke of Orleans. He did not have any mistresses during his lifetime and rule as the King of France. He died on May 14, 1643, of intestinal tuberculosis.