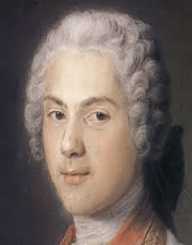 Louis, Dauphin of France, was born at the Palace of Versailles in Paris, France on the 4 September 1729. He was the first son of  King Louis XV of France and Queen Marie Lesczynska. He had three older sisters; and a younger brother, Philippe who died young. Cardinal Armand de Rohan baptised him as an infant. When he was seven years old, on the 27 April 1737, he was publicly baptised and given the name of Louis.

His godparents were the Dowager Duchess of Bourbon, widow of Louis III and Louis, Duke of Orleans. The Duke of Chatillon was appointed his governor, the Count of Muy, under-governor and Jean-Francois Boyer became the preceptor.

Louis, Dauphin of France, married Maria Teresa Rafaela, the daughter of King Philip V of Spain on the 13 December 1744. The wedding was done by proxy in Madrid, Spain on the 18 December 1744 and celebrated in person at Versailles in Paris, France on the 23 February 1745. The marriage was a happy one, and the couple had one child, a daughter Princess Marie Therese of France (b.1746-d.1748). His wife died on the 22 July 1746 a few days after giving birth to her daughter.

To provide an heir to the French throne, Louis was obligated to remarry as quickly as possible and his second wife was Maria Josepha of Saxony, the daughter of Frederick Augustus II, of Prince-Elector of Saxony and King of Poland. The marriage took place by proxy in Dreson on the 10 January 1747 and in person at Versailles, Paris on the 9 February 1747. After two stillborn sons (1748 and 1749), the couple had a daughter, Marie Zephyrine (b.1750-d.1755).

Louis, Dauphin of France, died at Fontainebleau on December 20, 1765. He had tuberculosis and was 36 years old at the time of his death. As his father was still King, Louis was never crowned king. Upon his death, his eldest son Louis-Auguste became Dauphin of France. Louis Auguste would later be crowned Louis XVI of France in May 1774.