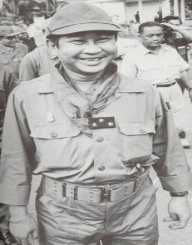 Marshal Lon Nol was a Cambodian politician and soldier. Lon served concurrently as the Prime Minister of Cambodia as well as the self-proclaimed President of Khmer Republic. Lon served as defense minister repeatedly. Lon was also founder and principal of the so-called Social Republican Party. Lon was commander-in-chief of the Khmer National Armed Forces as well. As a general, he overthrew Prince Norodom Sihanouk in 1970 and began his stint in power. Lon Nol reign came to an end when the Khmer Rouge communists trounced his army.

Lon Nol was born in Prey Veng Province on November 13, 1913. Nol was born into a family of mixed Khmer-Chinese descent. It was a family of prominent and influential people. This gave Nol the pedigree that ultimately qualified him as a political chess player.Nol's father, Lon Hin, was the son of a Khmer Krom from Tay Ninh Province who later served as a district chief in Siem Reap and Kampong Thom, after making a name for himself 'pacifying' bandit groups in Prey Veng.Lon's maternal grandfather also was a Chinese immigrant from Fujian province who later became the governor of Prey Veng.

Lon Nol was educated at the Lycée Chasseloup-Laubat in Saigon. He afterward attended the Cambodian Royal Military Academy.

After Lon Nol's education at the Cambodian Royal Military Academy, he joined the French colonial civil service as a magistrate in 1937. Nol proved himself as an efficient enforcer of French rules against series of anti-colonial disturbances Nol went on to serve as a provincial governor and head of the national police. In 1952, pro-independence Nol, 39-year-old at the time, joined the army and carried out military operations against the Viet Min. Later, he became the Cambodian army chief of staff and also served as commander in chief under the country’s leader, Prince Norodom Sihanouk. Subsequently, Lon Nol held a variety of ministerial offices under Sihanouk regime, including that of Minister of Defense, as well as the Prime Minister of Cambodia, a post he held twice in his career.

Before Lon Nol became prime minister the second time in 1968, Nol was involved in a car crash that temporarily retired him from politics.

In 1970, Lon Nol was one of the chief architects of the coup against Sihanouk. Nol after that became the most prominent leader in the new government. Lon Nol established close ties with the United States and South Vietnam, permitting their forces to operate on Cambodian territory. Thus abandoning Sihanouk's policy of neutrality in the Indonesia war. On March 10, 1972, Lon Nol assumed total power over Cambodia and installed himself as president two days later.

The communist Khmer Rouge movement started and continued to gain momentum in the countryside. Their appearance of gaining ground and with their insurgents on the verge of taking over Cambodia Nol fled the country. Nol fled to the United States, settled there and remained until his death in 1985.

Lon Nol was a firm believer in traditional Cambodian hierarchy. This was notwithstanding Nol's notoriety for overthrowing the government. He coined the ideology of chauvinist nationalism and mysticism, "Neo-Khmers." Nol expressed ambition of reuniting the ethnic Khmers of Cambodia with the Khmer Krom of the Mekong Delta and the Khmer Surin of Thailand, projecting a state of "thirty million" Khmers by the year 2020.

At the time of death, Lon Nol was married to Sovanna Lon, his second wife, and was the father of nine children.
Lon Nol died from a heart problem on November 17, 1985, in Fullerton, California, United States and was buried at the Loma Vista Memorial Park.