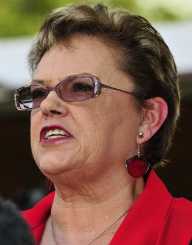 Alice Lynne Murchison was born 4th March 1948, to Cliff and Avis Murchison. She was born in Whakatane, in New Zealand. Known as "Lindy" from her early years, she moved to Australia in 1969 with her family.

Chamberlain-Creighton belonged to the Seventh Day Adventist church with her family. In 1969, she married Michael Chamberlain, a pastor of the church.

At the time of their trip to Uluru in 1980, they had three children. The two older children were boys, Reagan, four years old, and Aidan, seven years old. The newborn baby was a girl, Azaria, and she was just two months old.

The family arrived at the campsite of Uluru on 16th August 1980.

The following night, Lindy Chamberlain put Azaria to bed in their tent before re-joining her husband and their friends for the evening.

There was testimony at the trial that her husband and one of the other campers heard a baby cry. Another camper testified she heard a dog growling. Chamberlain-Creighton headed towards the tent and saw a dingo emerge with something in its mouth.

Lindy Chamberlain cried out to her husband that a dingo had their baby. She gave chase, but to no avail.

Authorities found Azaria's jumpsuit with bloodstains around the neck. Chamberlain-Creighton advised there was also a matinee jacket.

It came to light during the trial that Derek Roff, Chief Ranger for the area had notified the government that they needed a dingo cull. He believed the dingoes would cause trouble with the humans at any time.

The magistrate and coroner of Alice Springs, Dennis Barritt, held the initial inquiry in late 1980 and early 1981. His findings agreed with the Chamberlains that a dingo had taken their daughter.

The Supreme Court quashed the findings. As a result, a second inquest began in December 1981. In 1982, Lindy Chamberlain was found guilty of murdering Azaria. Her husband, Michael, was then charged as an accessory.

She gave birth to another daughter, Kahlia, in 1982.

Convicted of murder, Lindy Chamberlain received a sentence of life in prison with no parole. Her husband received a three-year suspended sentence.

The prosecution made ludicrous claims which led to the conviction.

Evidence of a Dingo

Testimony of witnesses at the trial all agreed with the story of the Chamberlains. Some heard the baby cry; another heard a dog growling. The Detective Sergeant took photos of large paw prints near Azaria's cot. He also found blood, but the samples didn't get tested.

There were canine hairs found in the tent, but the Chamberlains didn't have a dog.

When Azaria's clothing was found, it was within 30 meters of a dingo's den. The travesty was that nobody realized the den was there.

As a result of the new evidence, a Royal Commission began in 1987. There was enough reasonable doubt to conclude the Chamberlains may not have murdered their daughter.

In 1988, the Chamberlains had their sentences acquitted. A third inquest began, and an open verdict delivered.

Another inquest began in 2012. The Chamberlains wanted a result of acknowledgement that one or more dingoes took Azaria. A final ruling declared that a dingo took the baby.

Between 1983 and 1988, there were four court cases concerning the incident.

In 1990, Lindy Chamberlain released her autobiography, Through My Eyes.

She and Michael divorced in 1991, unable to cope with the pressure of the years since Azaria disappeared.

There have been several films about the case over the years. In 1983, Who Killed Baby Azaria? was released. In 1988, Evil Angels screened. The rest of the world knew it as A Cry in the Dark.

In 2004, a television mini-series screened, called, Through My Eyes: The Lindy Chamberlain Story.