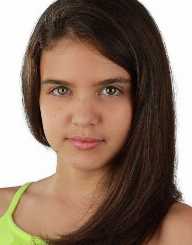 Lilimar Fernandez Ruiz, more popularly known as just Lilimar, was born on June 2, 2000, in Nueva Esparta, Margarita Islands, Venezuela. Her parents were of Cuban origin. At the tender age of 6, Lilimar and her family shifted base to Miami, Florida in the United States.

Lilimar started off her career by doing various primary commercials. She got enrolled at the Groundlings Theatre and School. Gradually, she started appearing in many national and international commercials, television films, music videos, webisodes, etc. With every project, she moved an inch closer towards the completion of her dream of becoming an actress, host, and model. She was also signed up as a model by many international designers.

In 2012, Lilimar bagged the opportunity to star as one of the performers in a segment of ‘Humor with the Kids.’ It was for Univision’s Chilean-Spanish language television program ‘SÁBADO GIGANTE.’ The show has the unique distinction of being the longest-running television variety series. In the following year, she became the voice of the character Marie in the film ‘Little Ghost.’ She also portrayed the character of Hiyas in the short film titled ‘Last Children.’

Lilimar has also starred in a Spanish soap opera titled ‘Rosario.’ She also left an impression as an RJ when she became the presenter of the radio show ‘Pangea Kids.’ In 2014, Lilimar did another short film titled ‘Pedro Pan’ where she essayed the role of Elena Martinez.

Lilimar had already cemented her name in the entertainment industry as a naturally-talented and creative actress and model. However, her big breakthrough came in the year 2015 when she landed the role of Sophie Delarosa in Nickelodeon’s show ‘Bella and the Bulldogs.’ Her portrayal of the pretty, brown-haired, cheerleading yet the no-nonsense best friend of the other two characters of the show Pepper and Bella earned her rave reviews and made her a household name.

Lilimar gained immense popularity from this show. Her talent was recognized, and she won the award for ‘Best Young Actress in TV Category’ at 30th Annual Imagen Awards. After bagging the role of Sophie Delarosa in the show, Lilimar has relocated to Los Angeles. She lives in the city with her mother and her grandmother.

The Venezuelan teen actress is cheerful and artistic. Off the screen, Lilimar is a very humble and shy person. She prefers a laid-back life and loves to spend time with her family. The 16-year-old feels grateful that she has got the opportunity to live her American dream. She was an immigrant, and it was difficult for her and her family to adjust to the new surroundings. The experiences she has had as an immigrant helps her stay grounded and not take her popularity and success for granted. She adores her fans and has immense respect for them. She also loves to travel and discover new things.

One unique feature of Lilimar is that she has heterochromia, i.e., her one eye is green in color while the other is brown. These unique qualities coupled with a vibrant personality make her endearing to her fans. Lilimar is also known for her impeccable sense of fashion. She is a trendsetter and is quite quirky in her choices. She is also a workaholic and takes very few breaks from her work. The confident and hardworking girl loves to stay connected to her fans and friends and hence is very active on social media platforms like Twitter, Instagram, and Facebook. She has over 680k followers on Instagram and over 50k followers on Twitter.