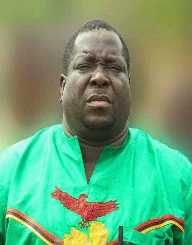 Zambian politician Levy Mwanawasa was born on the 3 September 1948 in Mufulira, in what was known as Northern Rhodesia and which is now Zambia. He had nine brothers and sisters.

Levy Mwanawasa was educated at Chiwala Secondary School and did his tertiary education at the University of Zambia, graduating with a law degree in 1973.

He worked for private law firms for five years then opened his own practice in 1978, Mwanawasa & Company. He was appointed the vice-chairman of the Law Association of Zambia in 1982 and in 1985, he became the Solicitor General of Zambia. In 1989, he represented a former vice-president of Zambia in a court case. Lt. General Christon Tembo was accused of plotting against President Kenneth Kaunda, and Levy Mwanawasa proved in court that he was innocent.

One of his first acts as Prime Minister was to deal with the corruption of his predecessor. He encouraged foreign investment and implemented financial policies which resulted in economic growth. He was also responsible for encouraging the development of Livingstone at Victoria Falls so that facilities attracted international tourism rather than letting most visitors see Victoria Falls from the Zimbabwe side.

He married Maureen Mwanawasa in 1988, and they remained together until his death in 2008. He had seven children, two from his sister marriage.

In late 1991, Mwanawasa was involved in a motor accident which left him with a speech defect. Because of his speech defect, he was called The Cabbage by some, and in 2002, he sued the Zambia Post for defamation because the paper had used the derogatory nickname. A Commission of Enquiry into the accident was of the opinion that the motor accident could have been an assassination attempt.

Mwanawasa had a health scare in early 2006 when he had a mild stroke. Then in June 2008, he was attending an African Union conference in Egypt when he had another stroke. He was taken to Paris, France for treatment and died two months later. He was fifty-nine years of age.

Levy Mwanawasa was born into a Protestant family.

He was an outspoken critic of Robert Mugabe, the Zimbabwean politician. He once accused Mugabe of turning his country into a sinking Titanic. In a heated exchange, Mugabe accused Levy Mwanawasa of being a stooge of Western agencies and a sell-out.