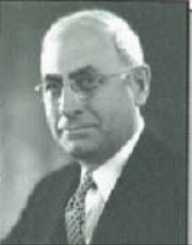 American historian and political scientist Leonard D. White was born on the 17 January 1891 in Massachusetts. He was the son of Bertha Dupee and John White and had one sibling, Richard Peregrine (b.1896-d.1993).

Leonard D. White obtained a BA from Dartmouth College (1914) as well as an MA (1915). In 1921, he was awarded a doctorate from the Universiy of Chicago. His thesis was The Origin of Utility Commissions in Massachusetts which was published in the Journal of Political Economy in March 1921.

Leonard D. White was a member of staff at the University of Chicago (1920-1958) and was the chairman of the Political Science Department (1940-1948). At the University of Chicago, he was appointed the Ernest DeWitt Burton Distinguished Service Professor of Public Administration and held the post until his death in 1958.  His primary field of interest was public administration, and he was one of the first to lecture on the subject at the university level.

Since 1959, the Leonard D. White prize is awarded annually for the best dissertation in the field of public administration. The inaugural winner was Dean E. Mann of the University of California, Berkeley for his thesis: The Administration of Water Resources in the State of Arizona.

Leonard D. White was awarded a Guggenheim Fellow Scholarship for Social Services (1927-1928), a 1948 Woodrow Wilson Foundation Book Award for The Federalists: A Study in Administrative History (1948) and was posthumously awarded the 1959 Pulitzer Prize for History for The Republican Era: 1869-1901.