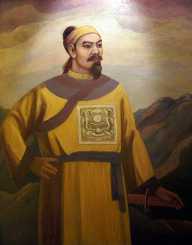 Le Loi also famously know as Le Thai To which is his temple name was the first emperor of Vietnam. Also, in 1418, Le Loi took the war to the Chinese overlords and won. Moreover, after the vicious struggle, he managed to take control of Vietnam from the Chinese overlords. Additionally, after the wars with the overlords from China, Le Loi installed himself as the emperor of Vietnam. Therefore, he is the founder of united Vietnam as he declared in the year 1428.

Le Loi was born the youngest boy of the families three sons. Moreover, Le Loi was born into a noble family in Vietnam. At the time of Le Loi’s birth, Vietnam was having some immense amount of hardship. There were many Chinese lords in the area ruling over the Vietnamese. Moreover, they were there under the directives of the Ming Dynasty. So, one of the people in Vietnam decided to rebel and took over some part of the country back.

However, this did not last as the Ming Empire sent an army to crush the rebellion. Consequently, reestablishing control over Vietnam. The government of China was so brutal to the natives. Therefore, Le Loi chose to be a rebel at such a young age. Also, this was after Le Loi got to witness the destruction and pain caused by the Chinese soldiers in his country.

The year 1418, after launched his anti-China campaign after experiencing what the Vietnamese were undergoing. Many wealthy Vietnamese families gave the move to oppose China support. The ones that gave him the most support were from the region of his home. At the beginning of his campaign, Le Loi was fighting to get the power of Tran. So, the people installed one of the relatives of the former Tran’s emperor.

However, just after a few years, they removed him, and Le Loi took total control of the situation. In the beginning, Le Loi was not having the massive success that he wished. Besides, Le Loi had a small army that could not defeat the Ming Empires army in open battle. So, he used the best tactics he could master the Guerilla warfare. At the time there were other Vietnamese that were siding with the Ming forces. So, Le Loi had to fight them too.

At the time he did not have a large army so he would hide in the mountains and attack when he could. Also, Le Loi sometimes made his soldier eat their horses and elephants due to lack of food. Sometime in the year 1422, Le Loi made peace with the Chinese army. However, after some time to gain a more massive army, he broke the peace deal. Also, the Ming army had made the mistake of killing his envoy. After that, it was all-out right war in Vietnam. So, by the year 1427, the Ming's army had been dealt.

Finally, after ten long years of war, the Vietnamese finally got to attain their independence from China. The Ming empire in the effort also helped by acknowledging their defeat and Vietnams liberation. Le Loi after winning against the foreign invaders took power and became the emperor of Dai Viet- (Viet Nam). In his capacity as the ruler of Vietnam, Le Loi founded the Le Dynasty. He also made sure the Ming Dynasty also recognized his rule.

Also, in his diplomatic gesture, Le Loi sent message swearing the Ming Dynasty of Vietnams loyalty. This message got received adequately at the Ming's court. So, in return, the Chinese left the Vietnamese alone. He then set out to establish his government by following the system of Confucius. The system was more of the same as that of the Chinese. Together with his longtime comrades, they rebuilt Vietnams infrastructures.  Also, they opened doors for trade with other countries including China. Before, that they made sure they minted their own money and they passed new laws to help the govern. Le Loi also reintroduced the old system of testing the government officials. Also, the test would be held regularly to see who was doing a good job.

After some time, Le Loi’s health begun to deteriorate. This was around the year 1430 to 1432. He and his army were out in the coastal regions of the country fighting off some enemies. The year 1433 came when his sickness took over his body. So, just before he could die, he made sure to name a reagent to rule on behalf of his son. However, after his death, someone killed his choice of a ruler.