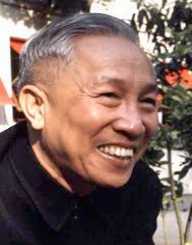 Le DucTho is a Vietnam native who became known for being one of two recipients of the 1973 Noble Peace Prize but who declined the award. He was a politician and diplomat who made an effort to keep the peace in Vietnam during and after the Vietnam War and the Second World War.

Born on October 10, 1911, in Nam Dinh Province at Vietnam, he was named Phan ?ình Kh?i. Tho was famous for his political involvement with the Vietnamese government during the Vietnam War and World War Il

Le DucTho became one of the founding members of the Indochinese Communist Party and assisted on their plans which led to his imprisonment in 1930 by French authorities, his first time, which lasted for six years until 1936. He was arrested three years later again in 1939 which lasted for five years until 1944, but he was released a year later in 1945.

Upon his second release, he went back to Hanoi and helped lead the Vietnamese Independence Movement, the Viet Minh, against the French colonial government. Under the Viet Minh, he served as Southern Vietnam’s senior official. Their efforts bore fruit in 1954 when the Geneva Accords were finally signed that signaled the Viet people’s independence from the colonizers.

A year later, in 1955, the Vietnamese Communist Party took on a new name; it became the Lao Dong Politburo of the Vietnam Worker’s Party. A year after that in 1956, Tho led the Communist Insurgency against the Southern Vietnamese government.

The Vietnam War officially broke out in 1955, and as a result, Le DucTho had to carry out his official duties in Southern Vietnam. The United States troops officially joined the war by the late 1960s. Around this time, word has been going around regarding Paris Peace talks, both in public and in private that will ultimately put an end to the War.


The Paris Peace Accords and the Nobel Peace Prize of 1973

On January 23, 1973, the Paris Peace Accords finally came to fruition which led to the cease-fire on both parties. For the Accords event, Xuân Thu? was the chosen delegate that served as the official negotiator and representative of the Democratic Republic of Vietnam that was held in Paris, France. At the same time, Le DucTho was already talking to Henry Kissinger, the US National Security Advisor 3 years before the Treaty, in 1970.

Even though the Treaty was already signed, there were still battles being held in various regions. The US troops had officially withdrawn by March 29, 1973, but there were still bombings occurring in Northern Vietnam.

The cease-fire did not fully take effect which led to another meeting by Tho and Kissinger on May of the same year, and a month after that in June. At the meeting, they discussed the full implementation of the cease-fire that led to a signing of a joint communique pledge both by the US and North Vietnam on June 13, 1973.

For both their efforts, Le DucTho and Kissinger both became the recipient of the Nobel Peace Prize of 1973 for attempting to keep the peace. However, Tho declined the award claiming that the war is still ongoing on his homeland and peace has not yet been fully restored in Vietnam, especially on the Southern parts. The war ultimately ended in 1975 when Saigon fell, and the North captured South Vietnam.