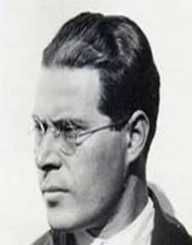 Laszlo Moholy-Nagy was born on July 20th, in 1895. He was a well-known painter and a photographer highly linked with constructivism. He is best remembered for bringing in the idea of blending technology with art. At some point in his career, he lectured the Bauhaus school.

Laszlo Moholy-Nagy was born on July 20th, in 1895. His birthplace was in Bácsborsód, Hungary.

In the early 1920s, Laszlo Moholy-Nagy taught at the Bauhaus school. He took over a position that was previously held by Johannes Itten, a renowned expressionist painter. Soon, he also took over as the chair of the Metal Workshop in the institution.

Throughout his entire career, Moholy-Nagy garnered immense fame particularly for his innovative skills in typography, photography, painting, and sculpture. However, he mainly focused on photography under the guidance of his wife named Lucia.

With time, Moholy-Nagy left the school after teaching for five years to work on his studio located in Berlin. Following his departure, Marianne Brandt replaced him as the chair of the workshop.

Laszlo Moholy-Nagy passed away on November 24th, in 1946. He died at the age of 51. He struggled with leukemia which led to his early demise.

As part of commemorating him, Moholy-Nagy University of Art and Design located in Budapest was named to honor his contribution in the field of art and design. Also, the software company called Laszlo Systems was given his name as part of honoring him.