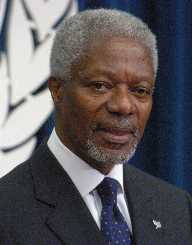 Also Known For : Secretary-General of the United Nations

Kofi Anan is a Ghanaian statesman who is best known for his time as United Nations General Secretary.

Kofi Anan was born in Kumasi in the British colony of the Gold Coast, modern-day Ghana, on 8 April 1938. Annan has a twin sister Efua Atta. His parents were Victoria and Henry Reginald Annan. His family came from Ashanti and Fante aristocracy. His father Henry worked as an export manager for a cocoa company. Annan was educated in a prestigious Methodist boarding school, Mfantsipim School. Annan graduated school in 1957 and the Gold Coast gained independence and renamed itself Ghana.

Annan went to study economics at the Kumasi College of Science and Technology. He received a grant to continue his economic studies in America. After receiving his degree, he studied international studies at The Graduate Institute of International and Development Studies in Switzerland. Annan also earned a master’s degree in management from the Massachusetts Institute of Technology.

Kofi Anan began working for the World Health Organisation as a budget officer in 1962. He was director of tourism for Ghana between 1974 and 1976. He returned to work for the United Nations in 1980 as part UN Commission for Refugees. In 1983, he moved to New York to work at the United Nations headquarters. He received some Assistant General Secretary Positions, Security Coordinator, Program Planner and Peacekeeping Operations.

Annan was head of UN peacekeeping during the disastrous Battle of Somalia and the Rwandan Genocide. Annan received criticism for his handling of the Rwandan Genocide, and later himself admitted he had failed many of the victims. Annan also oversaw peacekeeping in the former Yugoslavia for a few months in 1995. Annan was made Secretary General of the United Nations in 1997. He served two terms as he was re-elected in 2001.

Kofi Anan set about expanding the work of UN Security Council. He sought a renewed commitment from member states and increased financial support. Annan issued the Millennium Goals which aimed to cut extreme poverty around the world dramatically. Annan also expanded cooperation between the United Nations and private enterprise. The United Nations Global Compact sought to add private companies to tackling extreme poverty in the world. The compact focused on issues around labor rights and environmental protection.

Under Annan, the Global Health Fund was established to combat the HIV epidemic and would later be used to fight other infectious disease outbreaks. Wanting to avoid a repeat of Rwanda Annan called for the UN to endorse the ‘Responsibility to Protect’ doctrine which allows the UN to use economic, diplomatic and military means to protect civilians. Annan was criticised by the Americans for his interference of weapon inspection teams in Iraq.

The UN did not sanction the 2003 Invasion, and Kofi Anan stated that it was an illegal act. Annan was heavily involved in the transition to civilian government in Nigeria and the 2006 Israeli withdrawal from Lebanon. Annan’s second term as United Nations General Secretary ended on 31 December 2006. Following his retirement from the UN Annan was called to lead an African Union delegation to Kenya to stem violence that had broken out in 2007.

Annan was seen as instrumental in negotiating a unity government agreement in the country. In 2012, the UN and the Arab League sent Annan as a special envoy to Syria to try and negotiate an end to the Civil War. After seven months a dejected Annan resigned stating there did not exist any appetite internationally or in Syria for peace.

Annan has been married twice. He married his first wife, Titi Alakija, in 1965. Together they had two children, Ama and Kojo. They separated and in 1984 Anna married Nane Lagergren.

Annan established the Kofi Annan Foundation as a, not for profit organization. It works to reduce global poverty and engineer peace and good governance across the globe.