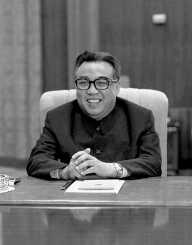 North Korean leader and founder Kim Il Sung was born on the 15 April 1912 into a peasant family in North   Korea originally from the North Jeolla Province. His birth came two years after the Japanese occupation of the Korean Peninsula. Due to political instability and the family’s resistance to the Japanese occupation, they fled to Manchuria where Kim became politically active at a young age.

After the family relocated to Manchuria, Kim studied at a Chinese school. He also was a student at the Whasung Military Academy (1926) and the Yuwen Middle School (1930).

Politically active, he founded the Down-With-Imperialism Union in 1926 and was jailed for his involvement. He then joined the newly formed South Manchurian Communist Youth Association, shortly afterward the union was raided by authorities, and Kim was imprisoned (1929). In 1931 he became a member of the Communist Party of China and began his involvement with anti-Japanese guerrilla groups which were operating in the north of China. The Japanese invaded Manchuria in 1931. Shortly afterward Kim met Wei Zhengmin who was chairman of the Political Committee of the Northeast Anti-Japanese United Army.

In 1935 Kim changed his name to Kim-II Sung (Kim Becomes the Sun) and by 1937 was the commander of the 6th division. H was successful in this role and earned himself the respect of other Korean guerilla leaders and fighters. Kim was appointed the commander of the 2nd operational region in the 1st Army, and by 1940 he was on the Japanese’s most wanted list. He was made a major in the Soviet Red Army and served in this position throughout until the end of World War II.

After the Yalta Conference of 1945 decided that American and Soviet would occupy Korea, the country was divided at the 38 parallel. Kim became head of the provisional government of North Korea, and in 1948 the Soviet Union established the People’s Democratic Republic of North Korea. In the south, the United States was establishing the Republic of South Korea.

Kim authorized the decision to invade South Korea in June 1950, and this led to the Korean War. The South Korean, UN and the United States trooped eventually forced Kim and his government north, and in October 1950, 180,000 Chinese troops arrived to assist Kim and his forces. A bloody conflict let over 2 million dead. Then on the 27 July 1953, an armistice was declared.

After the Korean War, Kim headed an authoritarian government with himself as the supreme leader. He continued establishing himself and ruled firmly until his sudden death in 1994. Some of his policies led to international sanctions. Then in the mid-1990s, President Carter of the United States initiated talks which convinced Kim to stop his nuclear development plans by offering to ease international sanctions.

His first wife was Kim Jong-suk who died in 1949 in childbirth. The couple had three children: a girl was stillborn in 1949, a son Kim Man-ill died in 1947, and Kim Jung-il was his heir. Kim remarried and had three more children with his second wife, Kim Sung-ae whom he married in 1952.

Kim Il Sung died on the 8th July 1994 of a heart attack, and his son Kim Jong-il took over as supreme leader of North Korea.