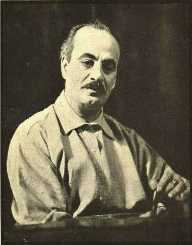 The Lebanese artist and poet Kahlil Gibran was born into a Christian Maronite family in the village of Bsharri in North Lebanon. When he was born, his mother had a son from her first marriage, Brutus. She later had two daughters Mariana (1885) and Sultana (1887). His father had a walnut grove and also worked as a tax collector for the village.

At some stage, his father was convicted of a crime, and in 1894, Gibran’s mother immigrated to the United States with her four children, leaving her husband in Bsharri. When the family arrived in Boston, they settled in the immigrant area of South End. Initially, Gibran’s mother worked as a pedlar, but once she had saved enough, she opened a family-run store in 1895.

In 1888, Kahlil Gibran had started attending the small village school. In Boston, Gibran became interested in drawing and painting, attending drawing classes at an art school across the road from his normal school. At the art school, Gibran met Fred Holland Day an artist and photographer who was the leader of the Visionists, a Pre-Raphaelite influenced group of Boston artists. Holland Day later was a co-founder of Copeland-Day Publishing.

Day used Gibran as a model, and he also became his mentor, encouraging the young man’s interest in art. Around this time Gibran met the American poet and dramatist Josephine Preston Peabody (b.1874 – d.1922) who was nine years his senior. They exchanged letters, and these were later published.

He was then sent back home to complete his high school education in Beirut where his lessons included French and Arabic language and literature classes.

Kahlil Gibran's first publication Music (al-Musiqa) appeared in 1905 and paid homage to music, mainly Arabic music. He followed this up in 1906 with Nymphs of the Valley (Ara’s al-Muruj). This was a short story collection expressing his anti-cleric views. Two years later, he produced Spirits Rebellious (al-Arwah al-Mutamclrrida). Then later that year, in 1908, Gibran left to study art in Paris at the Academie Julian (1908-1910). The trip was paid for by his friend and patron Mary Haskell.

In Paris, in 1910 he met Ameen Rihani, and they visited London, familiarising themselves with the art of the capital. Rihani then departed for America and Gibran returned to Paris. He spent two and a half years in Europe before returning to America.

When Kahlil Gibran returned to America, he started spending more time in New York City and eventually rented a studio at 51 West 10th Street. In 1912, he published The Broken Wings (al-Ajniha al-Mutakassirah ) which he dedicated to his patron, Mary Haskell. In 1914, Gibran held an exhibition at Montrose Galleries and also published A Tear and A Smile. In 1916 he was introduced to Mikhail Naimy, and they became friends. Naimy would eventually become his biographer. Gibran’s first work in English, The Madman, was published in 1918.

Twenty Drawings, a selection of his drawings was published in 1919. Alice Raphael wrote the introduction. The same year Kahlil Gibran published The Processions, an Arabic poem concerning spiritual freedom and bondage. The Tempests (1920) followed, and he also published his second English work in 1920, The Forerunner. In 1923 produced a series of essays and narratives entitled The New and The Marvellous. His most famous book, The Prophet was published in New York in 1923.  In 1926 Sand and Foam appeared and was followed in 1928 by Jesus, The Son of Man.

The Prophet was published in 1923. The book has always sold well, making Kahlil Gibran one of the best-selling poets and has never been out of print. Many artists in popular culture have acknowledged the book’s influence on their work. Since the 1860s, the book has also found a readership within the New Age Movement.

Kahlil Gibran’s life was marred by sadness, having lost his sister Sultana, brother Brutus and his mother between 1902 and 1903. After the death of their mother, he became responsible for Mariana and ran the shop and paid off all the debts before allowing Mariana to support them with her work as a seamstress.

Kahlil Gibran died at the age of forty-eight in New York City on the 10 April 1931 of tuberculosis and liver failure. His sister Mariana and his patron Mary Haskell arranged for him to be buried in Lebanon. They bought the Mar Sarkis Monastery, and today this is the Gibran Museum.

His letters to Mary Haskell were donated to the University of Carolina and were published in 1972. Haskell also gave her collection of Gibran’s artworks which went to the Telfair Museum of Art in Savannah, Georgia.