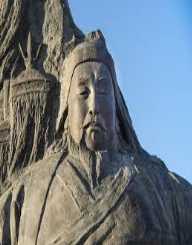 Khabul Khan was the great grandfather of the renowned conqueror Genghis Khan. He also holds the title as the first Khan of the Khamag Mongol as recorded in history.

Born on c. 1100 in the north central area of Mongolia, Khabul Khan, was the son of Tumbinai Setsen from the house of Borjigin.

Besides being known as the great grandfather of the founder of the Mongol empire, Khabul Khan has his accomplishments at his rights. During the invasion of the Jin Dynasty in the 10th Century, he successfully defended the Mongol tribes from neighboring tribes’ attack.

His reign is believed to have started from 1130 until 1146. He also fathered seven sons, of which he named Ambaghai as his successor. Ambaghai was not his son but the son of Sengun Bilge, a man from the clan of Taichuud.

Under his reign, Khabul Khan managed to unite the tribes of Mongolia as a way to fend off invaders, making him the first leader to do so. His hard work paid eventually because not only did he managed to defend the tribes against the enemy, but he also led the Borjigon Mongols as the leading clan In Central Mongolia by 1120.