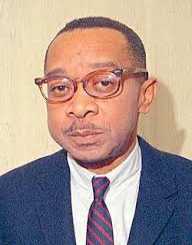 Kenneth Bancroft Clark was born on July 14, 1914, in the Panama Canal Zone. His father, Arthur Clark, worked as an agent in a fruit company. His mother was Miriam Hanson Clark. He had a younger sister named Beulah.

When he was five, his parents divorced, and he moved to New York City with his mother and sister. His mother worked as a seamstress and became a representative of the International Ladies Garment Workers Union.

Kenneth Bancroft Clark began his education in schools in Harlem. He then transferred to the George Washington High School in Manhattan, graduating in 1931. He later earned a bachelor’s degree in political science from Howard University. There, he studied under professors like Ralph Johnson Bunche and Francis Cecil Sumner. In 1935, he earned a master’s degree in psychology from Howard. In 1940, he received a doctorate in psychology from Columbia University.

In 1937, Kenneth Bancroft Clark married Mamie Phipps, a fellow psychologist. They had a son named Hilton and a daughter named Kate.

In 1942, Kenneth Bancroft Clark became a professor at the City College of New York. That same year, he started a psychology department at the Hampton Institute. In 1946, he and his wife opened up the Northside Center for Child Development.

They helped black children in need. They performed the doll experiment, attracting a lot of attention from the public. They gave black and white dolls to a group of children and asked them which ones they preferred. They used the results of the experiment to understand the effects of segregation and internalized racism better.

In 1954, Kenneth Bancroft Clark was an expert witness in Brown v. Board of Education, the Supreme Court case that fought against segregation. The following year, he wrote the book Prejudice and Your Child. In 1962, he co-founded the Harlem Youth Opportunities Unlimited Organization. In 1966, he joined the New York State Board of Regents and became the head of the American Psychological Association.

The following year, he testified in front of President Johnson’s National Advisory Commission on Civil Disorders. He published the books The Dark Ghetto, A Relevant War Against Poverty, and The Negro and the American Promise. In 1975, he retired from his teaching job at City College. He released two more books, titled A Possible Reality and Pathos of Power. He kept his place on the board of the New York Civil Rights Coalition.

Kenneth Bancroft Clark passed away on May 1, 2005, in his home in Hastings-on-Hudson, New York. He was 90 years old.