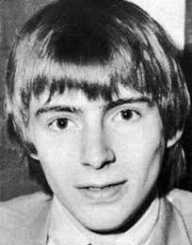 Keith Relf was in his teens when he began playing in bands. He was a singer as well as a musician.

Keith Relf was a founding member of the English rock band, The Yardbirds. The group formed in London in 1963 with Relf as the lead singer and harmonica player. Other members were Jim McCarty, drums; Chris Dreja, guitarist and bass player and Paul Samwell-Smith, bass player and producer.

The Yardbirds were a seminal band and guitarists at various times were Eric Clapton, Jeff Beck, and Jimmy Page. The string of hits they had in the 1960s included For Your Love, Heart Full of Soul, I’m a Man, Shapes of Things and Over Under Sideways Down.

The band chartered in the United States and toured. After the Yardbirds disbanded in mid-1968, Relf and McCarty formed an acoustic duet. Jimmy Page went on to form Led Zepplin. Later, Relf founded Rennaissance and in the early 1970s, worked as a record producer. He also played with Bobby Caldwell, Martin Pugh and Louis Cennamo in Armageddon.

Keith Relf had chronic asthma for most of his life.

Keith Relf's wife was April Liversidge whom he married in 1966. Their sons are Jason and Danny. In 1976, Keith Relf died from electrocution as the result of playing an unearthed electric guitar in the basement of his home. He was 33 years old.