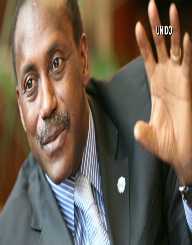 Kandeh Yumkella married Philomena Yumkella with whom he has two daughters. The family lives in Vienna where he works for the UNIDO at the Vienna International Centre.