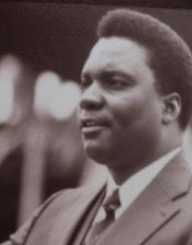 Also Known For : President Of Rwanda

Juvenal Habyarimana was born on March 8th, 1937. His place of birth was in Ruanda-Urundi which is now identified as Rwanda. He is famous for being the third president of the Rwandese Republic. He took the post as the president in 1973 and lead all the way to 1994. His service as the president for many years made him the longest serving to date. Additionally, during his tenure, he was dubbed “Kinani” which means “invincible” in Kinyarwanda. He came up with the National Revolutionary Movement for Development which was the sole party that existed in Rwanda during his ruling. This contributed to his dictatorship ruling over Rwanda. He was assassinated on April 6th, 1994, ending his term as the president.

Juvenal Habyarimana was born on March 8th, in 1937 to a Hutu family. He went to St. Paul’s College where he studied mathematics and humanities. Later on, he went to learn medicine at the Lovanium University situated in the Democratic Republic of Congo. Upon his return from DRC, he enrolled for on-going training as a National Guard. After this, he went to a military school where he proved his cadet prowess. At the military school, he also received parachuting skills. With the dedication that Habyarimana had, it earned him the position of a second lieutenant during his graduation. This was an achievement that rarely occurred from the National Guards.

Two years later after graduating from his training, Juvenal Habyarimana was given the order to serve as National Guard’s Chief Of Staff. This was a post that he served for two years from 1963 to 1965. In 1965, he found himself in the government as the minister of defense.

With the power he had, he befriended the current president called President Gregoire Kayibanda. The president found Habyarimana to be an exceptional leader in the army, and he crowned him as the major general. This occurred in 1973. Hungry for power, Habyarimana had his eyes on the topmost position in the government, the president’s position. In July the same year, he organized a coup. He successfully overthrew President Gregoire Kayibanda and claimed that he had failed in his duties to ensure peace within the nation. This gave Habyarimana the power to serve as the president from July 5th, 1973.

Two years later, Juvenal Habyarimana demonstrated his dictatorship ruling style by establishing the National Republican Movement for Democracy and Development. This was the only party that was supposed to rule in Rwanda. Up to this period, the nation was still under the rule of the military. This ended in 1978 following approval of the new constitution. Because he was the only candidate, he was elected to office as the president. Later on, he also got re-elected in 1983 elections and served for another term ending 1988. People grew tired of his ruling and in 1980; there was an attempted coup that failed. Additionally, the West also pressured him to step down. Such pressures contributed to the reformation that paved the way for a multiparty system in Rwanda. Elections involving several parties were held in 1992.

After these elections, Habyarimana was again given a chance to serve as president. He was the head of the power-sharing government that had been brought about by the peace agreement held in Arusha in 1993.

Juvenal Habyarimana tied the knot with Agathe Habyarimana and had eight children together.

On April 6th, 1994, Juvenal Habyarimana was assassinated while traveling alongside Cyprien Ntaryamira, a former Burundian president. They were on their way to Burundi from Tanzania when they were both assassinated. A missile struck the plane they were traveling with causing it to burst into flames and later crashing.