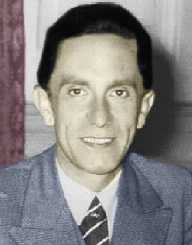 Joseph Goebbels was born on October 29th, in 1897. He is best remembered for serving as the propaganda minister for Nazi Germany. Similarly, Joseph was acknowledged for having helped the Nazi German government to gain a positive public image out there. After Adolf Hitler’s death, he went ahead and served as the German chancellor. However, he only did this for a single day before he and his wife took their own lives as well as that of their own children.

Joseph Goebbels was born Paul Joseph Goebbels on October 29th, in 1897. His place of birth was in Rheydt in Monchengladbach, Germany. His parents were of Roman descents. Fritz, his father worked as a factory clerk whereas his mother Katharina was a homemaker. Joseph had five other siblings.

Joseph Goebbels went to Roman Catholic High School. After that, he joined the University of Heidelberg where he spent five years studying history. Owing to his clubfoot, Joseph was not drafted in the World War I.

In 1922, Joseph graduated from the University of Heidelberg with doctorate honors in German philosophy. After that, he pursued a writing career.

In 1924, Joseph Goebbels developed a particular interest in Nazism and generally in Adolf Hitler way of ruling. Part of the main reason why Joseph saw Hitler as unique was that he had a special commitment to his ideologies. Around this period, Joseph became a member of the Nationalsozialistische Deutsche Arbeiterpartei Party (NSDAP). It did not take time before he offered his services to the district leader of the part in the same year.

Two years down the line, Hitler gave Joseph Goebbels the opportunity of working as a district leader. Later, he came up with the Führer myth which would convince the German people to become part of Nazism. Some of the activities that Joseph dealt with included publishing propaganda, designing posters and using bodyguards to bring about street battles. The main reason for doing this was to enhance political agitation.

Due to his effective control of propaganda all over all media channels, Joseph Goebbels was a feared individual. The Jews mostly feared him for they were against Nazism. In line with this, in 1932, Joseph planned for a boycott that was meant to incite people into avoiding Jewish businesses. During the World War II, his propaganda management prowess aided in ensuring that they were not perceived as losses although they had lost on different battlefields. He kept on motivating people thanks to his public speeches.

With Germany on the brink of losing, Joseph Goebbels began pushing for what would be termed as Total War. This was meant to mobilize the country’s resources entirely towards winning the war. Therefore, the outcome of this military strategy would have been either winning the war or getting destroyed.

Germany adopted his war strategy in 1944. Nonetheless, Germany lost the war the following year in April. This influenced Hitler to shoot himself on April 30th, 1945. Joseph was devastated as a result. All he thought was that they had utterly lost everything and that the only way was Hitler’s way – suicide.

Joseph Goebbels met with Magda Quandt in late 1930. In December the following year, the two got married. The two were blessed with six children.

After the death of Hitler, Joseph Goebbels took over as the German Chancellor. However, he only served for a single day before committing suicide. Joseph and his wife poisoned their six children by injecting them with cyanide. After that, they took their own lives on May 1st, 1945.