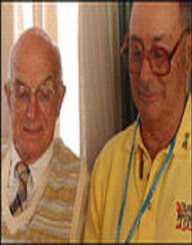 Joseph E. Murray was born on April 1, 1919. He was an American plastic surgeon. In 1990, he received the Nobel Prize in Physiology or Medicine. He is known as being the first person to perform a human kidney transplant in 1954 successfully.

Joseph E. Murray was born on April 1, 1919, in Milford. Massachusetts. He was born to William Murray who was a lawyer and Mary who was a school teacher. He attended Milford High School. He played sports such as hockey and football among others while he was in school. He later joined the College of the Holy Cross where he studied philosophy and English. In 1940, he graduated from the college with a Degree in Humanities. He later joined the Harvard Medical School where he studied medicine. In 1943, he graduated from the school.

In 1944, Joseph E. Murray joined the Army Medical Corps as an army doctor. At the army, he learnt about human organ transplant. After the war ended, he became a part of the surgical staff of the Peter Bent Brigham Hospital. He trained in plastic surgery at Memorial Hospitals and in New York. In 1951, he made his way back to Brigham.

In 1954, Joseph E. Murray was asked if he could perform a kidney transplant surgery on a patient who was suffering from nephritis. The patient, Richard Herrick, had a twin brother who was willing to donate his kidney for the transplant. In the same year, he performed the surgery at the Peter Bent Brigham Hospital. The surgery became the world’s first human renal transplant. The operation lasted a whole five and a half hours. The surgery was a success because Richard enjoyed his life for another eight years.

In 1962, Joseph E. Murray performed the first cadaveric renal transplant. He was recognised as the international leader in the study of transplantation biology. He collaborated with other scientists to develop the drug Imuran which was used in transplants. He trained many physicians at the Harvard Medical School. He was the chief plastic surgeon at the Peter Bent Brigham. He was also a plastic surgeon as the Children’s Hospital in Boston. In 1986, he retired from the Harvard Medical School as professor of Surgery Emeritus.

In 1990, Joseph E. Murray received the Nobel Prize in Physiology or Medicine jointly with Donnall Thomas for their discoveries concerning organ and cell transplantation in the treatment of human disease. In his lifetime he received many awards such as the American Surgical Association’s Medal, the American Academy of Arts and Sciences Francis Amory Prize and the American Association of Plastic Surgeons’ Honorary Award. In 1996, he became an Academician of the Pontifical Academy of Sciences in the Vatican.