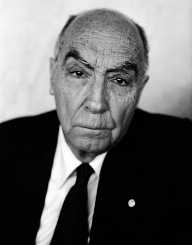 Portuguese writer Jose de Sousa Saramago was born on November 16, 1922. His parents were peasants with no land in Azinhaga, Portugal. In 1924, the family moved to Lisbon, where his father started to work as a policeman. The same year, the family suffered through a big loss, when Saramago’s older brother died.

As a child, José Saramago spent the summers with his grandparents in Azinhaga. It was a big loss for Saramago when his grandfather suffered and later died from a stroke. He was a good student, but his parents could not afford to keep him in a grammar school and moved him to technical school. After graduation, Saramago started working as a car mechanic. He later became a translator and journalist. Until 1974, Saramago was the assistant editor of Diario De Noticias. His job as a translator secured Saramago with enough funds to solely support himself as a writer.

José Saramago was a member of the Portuguese Communist Party from 1969 until his death. His views were very controversial and criticized by the government. In his publication The Gospel According to Jesus Christ, Saramago represented Jesus as cruel human being. The government did not allow his work to compete for the Aristeion Prize since it offended the Catholic community. After this happened, he and his wife moved to the Canaries.

José Saramago's style features long sentences that are at times even a page long. His works also refer to his other works. His style is very experimental, for example in the novel Blindness, he doesn’t use proper nouns but refers to characters by some characteristic. His novels often have fantastic scenarios, like a country getting struck by an unnamed plague of white blindness.

José Saramago's work received world recognition only when he was sixty years old. He published his fourth novel Memorial de Convento. The baroque tale tells a story during the Inquisition in 18th-century Lisbon. The novel won Portuguese PEN Club Award. In 1998, Saramago was selected as the recipient of the Nobel Prize for Literature. The Swedish Academy praised his modern skepticism about truths. He has also received the America Award in 2004 and Sao Paulo Prize for Literature in 2009.

The Catholic Church often criticized josé Saramago for the content of his novels. He was an atheist and presented God in a comical and distorted way. After receiving the Nobel Prize in Literature, Vatican questioned the Swedish Academy’s decision on political grounds.

José Saramago was also an anarcho-communist and a member of the Communist Party of Portugal. He was a candidate in all elections to the European Parliament from 1989, until his death. He was a critic of European Union and International Monetary Fund policies. His political convictions were made clear after he published The Notebook, which was written from a Marxist perspective.

In 2007, José Saramago founded the Jose Saramago Foundation, with an aim to defend and spread Universal Declaration of Human Rights. It also works to promote culture in Portugal and protect the environment.

José Saramago has been married two times. His first marriage was to Ilda Reis in 1944, and the couple had a daughter Violante. In 1986 he met Spanish journalist Pilar del Rio, who he married in 1988.

In the last years of his life, José Saramago lived in Lanzarote, Spain. He had leukemia and died on June 18, 2010. After his death, Portugal declared two days of mourning. His funeral was held in Lisbon, in the presence of more than 20,000 people. Saramago’s ashes were buried underneath an olive tree in the square in front of Jose Saramago Foundation building.