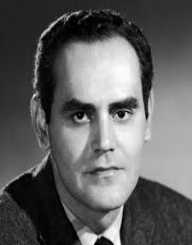 José Quintero was a Panamanian-born U.S. producer, playwright, and a film director. He came into the limelight after an interpretation of Eugene O'Neill's prominent work. He founded Off-Broadway theatre Circle in the Square.

José Benjamin Quintero was born in Panama City on 15th October 1924. He was the third born child of Carlos Rivera Quintero, a Spanish and Consuelo Palmerola.In many occasions, Quintero described his childhood as a disaster majorly because he was raised by an overbearing and domineering father.

The family later moved to the United States where he was educated. He went to Los Angeles City College before joining The University of Southern California.

Although his strict father wanted him to be a physician, he chose a different path; he wanted to do theatre. His father disowned him for his decision; he was declared dead by his father. His bad blood with his father led him to stay away from his family for seven years.

After completing his education, José Quintero embarked on his dream. In 1951, Quintero and Theodore Mann co-founded Circle in the Square Theatre.

He is regarded as the father of Broadway theatre. In 1956, he staged some of his work including The Iceman Comet a film that set the stage for Jason Robard's career. Later in 1956, his production company established itself as the premiere for the O'Neill's dramas which won him Tony Awards.

Between 1963 and 1968, he was involved in the production of many films in America before traveling to Mexico. In Mexico, he directed Dolores Del Río in the movie The Lady of the Camellias. His alcoholic problem, however, led to his dismissal.

Apart from O'Neill's he produced and directed over seventy films. He was also involved in the production of the Metropolitan Opera.

José Quintero was married to Nicholas Tsarist. For a long time, Quintero battled with alcoholic problems which affected his career on many occasions. He was, however, able to overcome this problem in 1970 with the help of his wife.

In 1987, José Quintero was diagnosed with throat cancer which warranted an operation to remove his larynx. The procedure led to his death on  February 26, 1999, at Memorial Sloan-Kettering Cancer Center in Manhattan hospital. Until his death, Quintero lived an active life.